Prince Fielder and Albert Pujols won't be the only first basemen to cash in with historic contracts this offseason. Joey Votto and the Reds have agreed to a ten-year, $225MM contract extension according to Bob Nightengale of USA Today. The deal includes full no-trade protection. Dan Lozano of Icon Sports Group represents Votto. 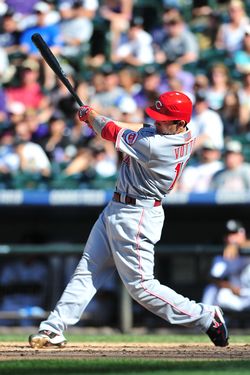 The ten-year deal will keep Votto in Cincinnati through 2023 according to Nightengale, indicating that it's ten years on top of the two years left on his current deal. Votto signed a three-year, $38MM extension prior to last season. With this new deal, he is now under contract for the next 12 years at a total price of $251.5MM.

This is the fifth deal in MLB history to surpass the $200MM mark. Prince Fielder, Alex Rodriguez (twice), Albert Pujols, and now Votto make up the select group. This is also the largest contract ever signed by a non-free agent, surpassing Derek Jeter's ten-year, $189MM deal with the Yankees. Ben Nicholson-Smith suggested in January that an additional $161MM could be enough to keep Votto in place long-term. Though not directly related, the Dodgers' sale price of $2.15 billion can't have hurt Votto's leverage.

Votto, the 2010 NL MVP, has evolved into one of the game's elite players since debuting in 2007. He followed up his MVP season with a .309/.416/.531 line, 29 homers and 40 doubles. The 28-year-old has been a seven win player each of the past two seasons, according to FanGraphs' version of wins above replacement.

MLBTR's Tim Dierkes and Ben Nicholson-Smith first reported that the two sides were nearing an agreement. John Fay of The Cincinnati Enquirer, Jon Heyman of CBSSports.com, and Ken Rosenthal of FOX Sports all added details (all four Twitter links).