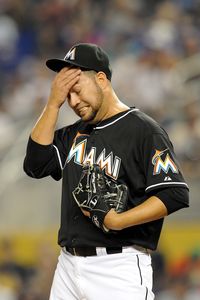 Cox, 23, was the Cardinals' first-round pick in 2010.  He's hitting .254/.294/.421 in 316 Triple-A plate appearances.  Baseball America ranked Cox fourth among Cardinals prospects prior to the season, and was still willing to call him a "potential No. 3 hitter" at the time.  It's a nice pickup for Mujica, even if Cox's star has fallen.