The Angels reinforced their bullpen with another free agent today, reaching an agreement with lefty Sean Burnett on a two-year deal with a club option, according to MLB.com's Alden Gonzalez.  The deal is worth $8MM, reports Mike DiGiovanna of the L.A. Times, and includes a $4.5MM vesting option for 2015 with a $500K buyout.  Burnett is represented by Jim Munsey. 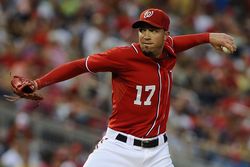