The Orioles have found their left fielder, retaining Nate McLouth on a one-year, $2MM deal with $500K in incentives.  McLouth is represented by The Sparta Group. 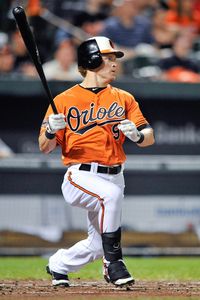 McLouth, 31, joined the Orioles in June after being released by the Pirates.  He had a nice run for the O's, hitting .268/.342/.435 in 236 plate appearances.  McLouth made the All-Star team in 2008 and signed a $15.75MM extension with the Pirates the following February.  The Bucs traded him to the Braves a few months later, where he had a disappointing three-year stint.  With the new Orioles contract, it was said McLouth sought only a straight one-year deal, as he looks to further re-establish his value.

So far this offseason, the Orioles also picked up the option for reliever Luis Ayala and acquired Alexi Casilla, Trayvon Robinson, Danny Valencia, and Yamaico Navarro.

Brittany Ghiroli of MLB.com first reported the agreement, Dan Connolly of the Baltimore Sun first reported it was close, and Ken Rosenthal of FOX Sports added the amount.  Photo courtesy of U.S. Presswire.