The Phillies have agreed to sign left-hander John Lannan to a one-year, $2.5MM contract, the team announced today. The deal includes another $2.5M in bonuses according to Jon Heyman of CBSSports.com (all Twitter links). Lannan is represented by Brodie Van Wagenen at CAA Sports. 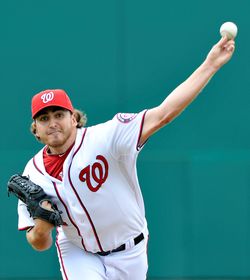 “Clearly we have a familiarity with John and his past performance and success in this division helps us add depth to our rotation,” GM Ruben Amaro Jr. said.

The pitching-rich Nationals non-tendered the 28-year-old Lannan last month rather than pay a projected $5MM in his third trip through arbitration. He spent most of last season in Triple-A (4.30 ERA in 148 2/3 innings) despite a $5MM salary, though he did make six big league starts for Washington (4.13 ERA in 32 2/3 innings).

Lannan, a four-pitch finesse left-hander, brings reliability to the Phillies rotation. He's thrown at least 180 total innings in each of the last five seasons and has a career 53.0% ground ball rate, which is well-above-average. He won't miss many bats though (career 4.7 K/9). Philadelphia was reportedly seeking a low-risk starter after trading Vance Worley for Ben Revere, and Lannan qualifies.

Because he was non-tendered in November, Lannan did not qualify for Tim Dierkes' Top 50 Free Agents List.

Jim Salisbury of CSNPhilly.com first reported the agreement (on Twitter). Photo courtesy of US Presswire.