The Phillies acquired outfielder Ben Revere from the Twins, reports MLB.com's Todd Zolecki.  Starting pitcher Vance Worley is going to the Twins in the deal, tweets Danny Knobler of CBS Sports, as well as pitching prospect Trevor May, according to Jim Salisbury of CSNPhilly.com.  Both teams have since confirmed the trade. 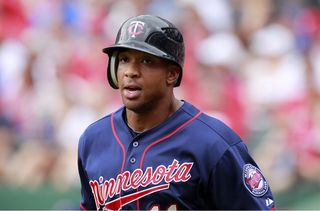 Revere, 24, hit .294/.333/.342 in 553 plate appearances for the Twins this year, stealing 40 bags in 49 tries.  With just one year and 149 days of Major League service, Revere will not be arbitration eligible until 2014 at the earliest, and is under team control through 2017.  He was a first-round pick of the Twins in 2007.  He'd been penciled in to take over center field from Denard Span, who the Twins dealt to the Nationals less than a week ago.