After rumors swirled around the Rangers and their catching situation for weeks, Texas has decided to retain the backstop that finished the 2012 season with the team, agreeing to a one-year deal with Geovany Soto. The deal, which is now official, will pay Soto $2.75MM, with incentives giving him the chance to earn $3MM. 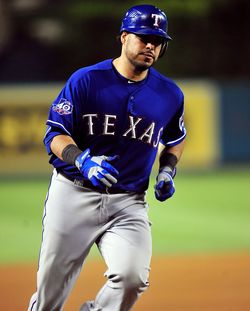 Soto is represented by the Wasserman Media Group, as shown in MLBTR's Agency Database. With the former Cub off the market, A.J. Pierzynski headlines a fairly uninspiring group of free agent catchers.

Evan Grant of MLB.com reported the agreement between Soto and the Rangers, with Jon Heyman and Danny Knobler of CBSSports.com adding financial details. Luke Adams contributed to this post. Photo courtesy of U.S. Presswire.