3:23pm: The Nationals announced that the deal is now official.

11:13am: The Nationals have agreed to sign Adam LaRoche to a two-year contract, Adam Kilgore of the Washington Post reports (on Twitter). Terms of the deal between the Nationals and the SFX client are unknown. 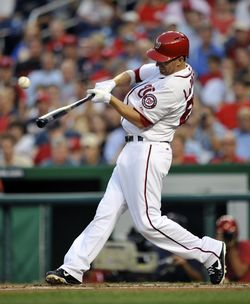 LaRoche ranked 15th on MLBTR's list of top 50 free agents entering the offseason. He declined a one-year qualifying offer from Washington, linking him to draft pick compensation. That appeared to affect his market, as other teams remained hesitant to surrender top draft choices. The Nationals made LaRoche a two-year offer earlier in the offseason, though it took weeks for him to accept. Kilgore reported late last month that the Nationals wanted to resolve their talks with LaRoche relatively soon.

LaRoche enjoyed a strong season in 2012, finishing sixth in the NL MVP voting and winning the Gold Glove and Silver Slugger at his position. The left-handed hitter posted a .271/.343/.510 batting line in 647 plate appearances as Washington's first baseman, appearing in all but eight regular season games. He set a career-high with 33 home runs and matched a career-high with 100 RBI.

Michael Morse now becomes a trade candidate, since the Nationals have a starting first baseman and three starting outfielders (Bryce Harper, Jayson Werth and Denard Span). I can imagine teams such as the Orioles, Rays, Indians and Yankees pursuing Morse, who can play first base or a corner outfield position.

The Orioles, Rangers and Red Sox are among the teams that were linked to LaRoche this winter. He initially joined the Nationals on a two-year, $16MM contract following the 2010 season. That deal included a $10MM mutual option for 2013 that LaRoche declined at the beginning of November.