FRIDAY: Jon Heyman of CBS Sports tweets that Oswalt will be able to earn more than $4MM should he reach all of the incentives in his contract.

THURSDAY: The Rockies have signed pitcher Roy Oswalt to a minor-league contract, the team tweets. Oswalt had previously tweeted to expect "exciting news." 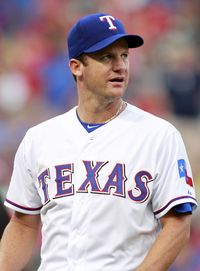 The Rockies will send Oswalt to extended spring training, the Denver Post's Troy Renck tweets. It appears likely that the Rockies will eventually promote him if he pitches well in the minors, although that is not certain.

It's not yet clear what Oswalt's role with the Rockies might be, although he has said that he prefers to start. The Rockies' rotation currently includes Jorge De La Rosa, Jeff Francis, Juan Nicasio, Jon Garland and Tyler Chatwood, with Jhoulys Chacin returning from injury to start on Sunday. Oswalt's deal contains out clauses, Renck writes.

Oswalt's agent, Bob Garber of RMG Baseball, said in March that his client hoped to pitch for a contender in 2013. He had previously been connected to the Phillies and Mets.