The Royals have signed first-round selection Hunter Dozier for a bonus of $2.2MM, reports Jim Callis of Baseball America (on Twitter). Dozier, the eighth overall selection of the draft, is advised by Frontline Sports Management. 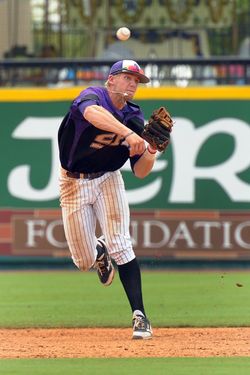 A shortstop out of Stephen F. Austin State University in Texas, Dozier first appeared to be a puzzling selection by the Royals. While most projected him to go on the first day of the draft, he ranked 40th on Baseball America's Top 500 list, 46th on Jonathan Mayo's Top 100 list and 38th on Keith Law's Top 100 list. The method to the Royals' perceived madness was made clear, however, when the team selected Indiana State left-hander Sean Manaea with the No. 34 overall pick in the draft.

By getting Dozier at a below-slot price of $2.2MM — the assigned value of the No. 8 overall pick is $3,187,800, according to BA — the Royals have secured a Top 50 prospect while saving extra money to pursue Manaea, who was a potential No. 1 overall pick before hip injuries derailed his junior season.

Dozier will turn 22 in August, and while he played shortstop at Stephen F. Austin State, most project him to move to third base, where he has enough bat to fit the position. Mayo noted that Dozier is "not among the few elite college bats in this class, but he's not too far behind them, either." BA notes that he has "exceptional" power to the opposite field and could be a 20-25 homer player.

In a separate article for BaseballAmerica.com, Callis writes that the Royals felt they had no chance to draft Dozier at No. 34, as the Rays would've selected him at No. 21 or 29, and the D-backs had considered him with the 15th overall selection.