Phillies' right-hander Luis Garcia looked the part of a big league pitcher when he made his MLB debut on Wednesday, striking out Ryan Zimmerman and getting a double-play grounder from Adam LaRoche. However, prior to this season he'd been out of organized baseball for two years, working for a moving company and in a barbershop, Todd Zolecki and Stephen Pianovich of MLB.com write. After showing the Phillies a mid-90s fastball and a decent slider, the team assigned him to their high-A club, and he's now pitching out of a major league bullpen. Some more Friday night Phillies links…

The official signing deadline for this year's draft has now passed, and the Blue Jays made some last-minute splashes. Toronto signed 11th-rounder Jake Brentz for a hefty $700K bonus and 30th-round pick Rowdy Tellez for a record-setting $850K bonus, according to Baseball America's Callis (Twitter links). However, Callis also tweets the team was not able to reach an agreement with first-round pick Phil Bickford, who will attend college at Cal State Fullerton.

Reports that the Blue Jays were unlikely to sign the No. 10 overall pick first surfaced yesterday. The team will now be awarded the No. 11 pick in the 2014 draft as compensation for failing to sign the right-hander. Bickford is the only first-rounder from this year's draft not to sign.

The assigned slot values of all picks after the 10th round is $100K, meaning that the Blue Jays went $750K over slot to sign Tellez and $600K over slot to sign Brentz. Tellez's bonus is the largest ever under the new CBA for a player selected after the 10th round of the draft. However, the Blue Jays' total spend is still within the confines of their draft pool, even without Bickford's money, as noted in Baseball America's draft database.

Tellez ranked 59th on Baseball America's list of Top 500 draft prospects and 99th according to MLB.com's Jonathan Mayo. BA called him the "best left-handed power bat in this year's draft class," noting that he also has a good feel for hitting and moves well for his 6'5", 230-pound frame. While he's seen time in the outfield, Tellez profiles as a first baseman. Tellez is advised by Phil Ortiz of the Primo Sports Group.

Brentz's signing comes just one day after reports stated that he was unlikely to sign. The prep lefty out of Missouri ranked 45th among draft prospects according to ESPN's Keith Law and 80th on BA's Top 500. In fact, Law actually had Brentz ranked ahead of Bickford. Law wrote that Brentz may be "the best pure left-handed arm in the draft class," praising his upper-90s fastball but noting that his curveball is a work in progress. Brentz is advised by Jason Wood of Arland Sports.

3:30pm: Jim Callis of Baseball America spoke with a person who is "in the know" on the Bickford situation and confirmed that Bickford is likely to attend Cal State Fullerton. Callis adds that it's not a physical issue preventing Bickford from signing and reminds readers that Bickford's pre-draft asking price was $4.25MM (Twitter links).

Callis also tweets that it's starting to look like the Jays won't sign 11th-round pick Jake Brentz, who was regarded as a second- or third-round talent. Baseball America had ranked Brentz 80th among draft prospects, while ESPN's Keith Law ranked him 45th. Brentz is committed to the University of Missouri. As Callis notes, the Blue Jays may only spend about $2MM on this year's draft.

The Blue Jays drafted Bickford, a hard-throwing prep righty, tenth overall.  He was a late riser on draft boards.  In their scouting report, Baseball America noted that Bickford "could be a tough sign away from Cal State Fullerton."  The Jays will receive the 11th overall pick as compensation next year if they fail to sign Bickford by tomorrow's 4pm central time deadline.  The Blue Jays are believed to have offered the slot value of $2,921,400, tweets Jon Heyman of CBS Sports.  Toronto previously failed to sign their first-round pick in 2011, Tyler Beede, as well as supplemental round pick James Paxton in '09. 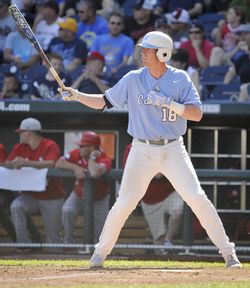 THURSDAY: The Yankees reached an agreement with Judge on a slightly over-slot $1.8MM signing bonus, writes George A. King III of the New York Post.  Judge is advised by PSI Sports Management.

WEDNESDAY: The Yankees are close to a deal with slugging Fresno State outfielder Aaron Judge, according to Jon Heyman of CBSSports.com.  The Yankees selected Judge with the No. 32 overall pick in the draft.

The Yankees offered Judge the slot amount of about $1.6MM weeks ago and have been waiting to get something done. The 6-foot-7, 255-pound slugger has big power potential and has earned physical comparisons to the NBA's Blake Griffin, according to Baseball America.  BA had him ranked as the 30th best prospect in the draft while Jonathan Mayo of MLB.com had him ranked at No. 24, and ESPN.com's Keith Law put him at No. 17.

The Cubs have reached agreement on a $6.7MM deal with No. 2 overall pick Kris Bryant, according to Jim Callis of Baseball America (via Twitter).  Jon Heyman of CBSSports.com reported earlier today that the two sides were close to striking a deal.

Bryant, who is being advised by Scott Boras, had a monster junior season in which he belted 31 homers and catapulted up the 2013 draft board.  The third baseman/outfielder will be the latest promising position player to join the Cubs' stash, joining shortstop Javier Baez and outfielders Jorge Soler and Albert Almora.

Heyman heard in late June that the two sides weren't close to an agreement.  Bryant and Boras were said to be seeking a bonus greater than the $6.7MM assigned pick value, while the Cubs wanted a deal for just over $6MM.

Boras said yesterday that was confident that a deal would be struck in advance of the mid-July deadline.  Some speculated that it could go until the eleventh-hour with Bryant being the final holdout of the first round, but the two sides have hammered out the framework for a deal with days to spare.

Bryant's pick came as a surprise as the Cubs were widely expected to select whichever top pitcher the Astros passed on (Jonathan Gray or Mark Appel).  Jonathan Mayo of MLB.com and Keith Law of ESPN.com had Bryant ranked as the second-best prospect in the draft while Baseball America had him ranked third.  BA writes that Bryant's best tool is his plus-plus right-handed power and notes that his athleticism should allow him to stick at third base.

TUESDAY, 2:04pm: The Padres have confirmed the signing via press release.

4:57pm: The Padres are close to signing first-round draft pick Hunter Renfroe, as MLB.com's Corey Brock reports (via Twitter) that the Mississippi State outfielder is in San Diego today to take his physical.  Once the physical is passed and the deal is signed, Renfroe will report to the Padres' short-season A ball affiliate later this week.  Renfroe is advised by McKinnis Sports Management.

No terms of the deal are known, though the 13th overall pick carries an assigned slot value of $2.678MM.  The Padres have agreed to terms with the rest of their picks from the first 10 rounds and are roughly $83K under their assigned draft pool budget, so it's possible this extra money could be used to give Renfroe a slightly-above slot deal.  (Tip of the cap to Baseball America for the previous two links.)

Renfroe, 21, was originally a 31st-round pick for the Red Sox in the 2010 draft but he instead chose to attend Mississippi State and ended up improving his draft stock considerably.  Baseball America ranked Renfroe as the 11th-best prospect of the 2013 draft class, while ESPN's Keith Law ranked him 12th and MLB.com's Jonathan Mayo ranked him 28th.  Renfroe projects as a right fielder due to his strong throwing arm and plus speed.  The right-handed hatter has "outstanding raw power" according to MLB.com's scouting report and has "progressed tremendously at the plate" in college, though "there's still some swing and miss to his game."

Once Renfroe's deal is finalized, he will be the 29th of the 33 first-round picks from the 2013 draft to sign contracts.

Ricky Nolasco shared some emotional goodbyes with his Marlins teammates on Sunday morning, the right-hander told Andre C. Fernandez of the Miami Herald, but he is excited about going home to southern California and pitching for the Dodgers.  The Marlins figure to have more moves up their sleeves before the trade deadline so here's the latest out of the Sunshine State…

The Athletics are set to promote Grant Green for their series in Pittsburgh tomorrow, and the San Francisco Chronicle's Susan Slusser suggests that the move could result in Adam Rosales being designated for assignment. Green is hitting .318/.374/.500 for Triple-A Sacramento, while Rosales is batting .200/.273/.331 for Oakland. The A's could use Green as a right-handed complement to second baseman Eric Sogard, Slusser suggests, particularly since the Pirates will start lefties Jeff Locke and Francisco Liriano in the upcoming series. Rosales, meanwhile, has played sparingly since mid-June. Here are more notes from around MLB.

Here is the latest news on draft and international signings as we look ahead to the July 12 deadline for Rule 4 draftees to sign. You can keep track of signings from the draft's first round right here. Only five players — Kris Bryant (Cubs), Colin Moran (Marlins), Phil Bickford (Blue Jays), Hunter Renfroe (Padres), and Aaron Judge (Yankees) — remain unsigned. As Jim Callis of Baseball America recently explained (subscription required), the changes to the draft system have sapped the signing period of its former deadline drama. Last year, for instance, only six first-rounders waited to sign until the last day, just three of those lasted until the last hour before the deadline, and only one (Mark Appel) did not end up signing.