The Athletics have officially acquired closer Jim Johnson from the Orioles in exchange for second baseman Jemile Weeks. Ken Rosenthal of FOX Sports (via Twitter) was the first to report the deal. The Orioles also pick up a player to be named later or future considerations in the deal, tweets Dan Connolly of the Baltimore Sun. 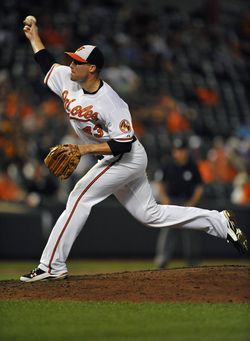 The Baltimore closer had been projected by MLBTR contributor Matt Swartz to earn a $10MM+ payday through arbitration for the Orioles, but will now have the opportunity to try and break eight figures in Oakland. Rosenthal reported earlier this evening that talks were heating up between the A's and O's on Johnson.

Weeks, meanwhile, has failed to reproduce his outstanding 2011 campaign, when he posted a .303/.340/.421 triple-slash in 437 plate appearances at age 24. Though he has struggled in the bigs since that campaign, Weeks did muster a .271/.376/.369 in Triple-A last year and still has the capacity to steal 15 to 20 bags a year. And with just 1.142 years of service under his belt, he will bring plenty of cheap years of control to Baltimore.

It appears that this deal fills holes for both clubs. The Athletics were in need of a back-end option with closer Grant Balfour hitting free agency, and the Orioles have long been searching for a reliable keystone option. The major questions, of course, will be whether Johnson can live up to his pay grade and whether Weeks will ever regain enough of his stroke to become a big league regular.