DECEMBER 17th, 3:06pm: The Giants announced that the deal is official.

9:15am: Morse will receive a base salary of roughly $5MM, and his contract contains additional incentives, according to ESPN's Buster Olney (on Twitter).

8:41am: The Giants have agreed to sign Mike Morse, according to Andrew Baggarly of CSN Bay Area (on Twitter). John Shea of the San Francisco Chronicle reports that it's a one-year deal for Morse, who will serve as the Giants' left fielder (Twitter link). 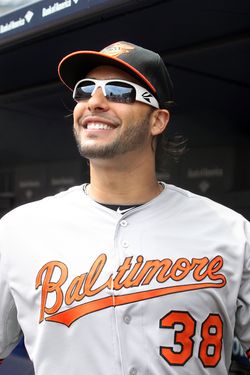 Morse, who is represented by ACES, battled significant injuries in 2013 en route to a career-worst .215/.270/.381 batting line with 13 homers between the Mariners and Orioles. His 2010-12 seasons were a different story, however, as Morse posted a gaudy .296/.345/.516 batting line with 64 homers in 1298 plate appearances for the Nationals as a first baseman/outfielder.

The caveat with Morse is that even in his most productive seasons at the plate, he's still a defensively challenged player. Morse has a career UZR/150 of -18.3 in left field, meaning he'll need to return to his 2010-12 form at the plate to provide a significant level of all-around value to the Giants. Morse also has experience at first base, where he's a more passable defender, so the Giants could at least entertain the idea of flipping him and Brandon Belt if Morse's glove is too rough in the outfield.

Morse will join an outfield alignment that will have Hunter Pence starting in right field, Angel Pagan manning center field and Gregor Blanco likely seeing plenty of time as a late-inning replacement for Morse in a fourth outfielder's role.

Earlier today it was reported that the Giants still hoped to add a right-handed swinging outfielder. The Giants were said to be in negotiations with Jeff Baker as recently as yesterday afternoon, but clearly elected to go a different route.