The Mariners have acquired Logan Morrison from the Marlins in exchange for right-hander Carter Capps, according to Clark Spencer of the Miami Herald (on Twitter). 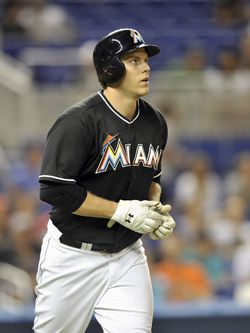 Morrison, 26, was a known trade candidate that was a near-lock to be traded at the Winter Meetings following the Marlins' signing of Garrett Jones to a two-year deal. The former top prospect has batted just .236/.321/.387 with 17 home runs in 178 games over the past two seasons after hitting .259/.351/.460 with 25 long balls in his first 185 big league games. Morrison's tenure with the Marlins has been rocky to this point. He's come under fire for his prolific and sometimes controversial Twitter presence and filed a grievance against the Marlins in 2011 after he was sent to the minor leagues in controversial fashion.

Morrison is under team control through the 2016 season and is projected to earn $1.7MM via arbitration by MLBTR's Matt Swartz.

Morrison is the second bat reeled in by Mariners GM Jack Zduriencik in the past hour, as the M's have also agreed to a one-year deal with Corey Hart. Should Morrison be able to rebound, he, Hart and recently inked Robinson Cano give the Mariners some added punch to their lineup. However, Hart and Morrison profile better as first basemen than outfielders, but one will now need to roam either right or left field at Safeco Field now that they're both in the fold.

The addition of these two bats calls into question the role of either Jesus Montero or Justin Smoak with the Mariners and could ensure that Kendrys Morales will need to find a new home this winter, which would net Seattle a draft pick.