7:34am: The Rockies are in agreement with left-hander Boone Logan on a three-year deal, tweets Jon Heyman of CBS Sports. The Denver Post's Troy Renck reported yesterday that the two sides were closing in on a three-year pact. Logan is represented by CAA Sports. 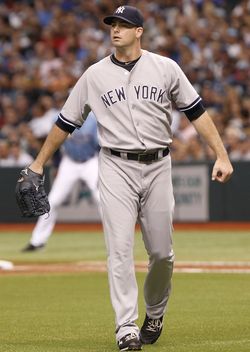 The Rockies, who have already added LaTroy Hawkins to the back of their bullpen this winter, were said to be aggressive on relievers at the Winter Meetings. Renck reported that they were serious about talks with free agents J.P. Howell and Joaquin Benoit and also came close to striking a deal for Reds lefty Sean Marshall before medical concerns caused them to back off. Despite the interest in Benoit, left-handed relief was always their priority, per Renck.

Logan gives Rockies director of Major League operations Bill Geivett that late-inning, left-handed option he so aggressively sought this week. Still just 29 years of age, Logan has posted a 3.38 ERA with 10.3 K/9, 3.8 BB/9 and a 43.1 percent ground-ball rate in 176 innings over the past four seasons with the Yankees.

Renck guessed last night that Logan's deal would be worth around $15MM in total, and later, Jon Paul Morosi of FOX Sports reported that the contract would indeed be worth more than $14MM. Javier Lopez's three-year, $13MM deal with the Giants likely set the market for Logan, but his agents at CAA look to have topped that figure for their client.