8:49pm: Wolf did agree to a 45-day advance consent form with the Marlins, reports Rosenthal (links to Twitter). He explained that he was comfortable agreeing to those terms this time around because he was signing in the middle of the season. Wolf was set to opt out and join another (unnamed) club when the Marlins offered him the chance to join their rotation, Rosenthal adds.

2:32pm: Ken Rosenthal of FOX Sports reports that Wolf will earn a $1MM base salary plus performance incentives (Twitter link).

2:11pm: Randy Wolf exercised an opt-out clause with the D’Backs earlier this afternoon and has a new team just hours later. The Marlins have officially announced the signing of the Wasserman Media Group client to a one-year, Major League deal. Wolf will reportedly slot into Miami’s rotation, though it sounds like he’ll be backing up rookie Anthony DeSclafani in tonight’s game. 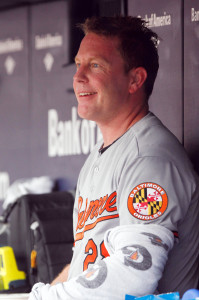 Earlier this afternoon, MLB.com’s Joe Frisaro reported that the Marlins were working to make a pitching addition that was not currently part of the organization, and Wolf would clearly fits that bill.

The 37-year-old Wolf underwent Tommy John surgery late in the 2012 season, but he looks to be fully recovered after a strong Spring Training with the Mariners and a respectable showing in six starts for the Diamondbacks’ Triple-A affiliate in Reno. Wolf posted a 4.50 ERA with a 35-to-18 K/BB ratio while in Reno. He had originally made the Mariners’ roster out of Spring Training as the fifth starter but instead requested his release when the team asked that he sign a 45-day advance-consent clause that would’ve allowed them to terminate the deal for any non-injury reason in that window.

Wolf is a 14-year big league veteran that has a 4.20 ERA with 7.0 K/9, 3.2 BB/9 and a 39 percent ground-ball rate in 2268 innings between the Phillies, Brewers, Padres, Dodgers, Astros and Orioles. Miami has a definite need for pitching depth after the devastating news that their young ace, Jose Fernandez, will likely miss the remainder of the season due to a torn ulnar collateral ligament in his right elbow.

With Fernandez out for the season, Nathan Eovaldi and Henderson Alvarez are locks in the rotation. Jacob Turner has been starting as well, but he’s battled shoulder problems that have likely hampered his effectiveness. Tom Koehler’s hot start likely leaves him with a rotation spot locked down as well. In addition to DeSclafani, Miami has a slew of pitching prospects that are nearly Major League ready, though none are as intriguing as 2012 first-round pick Andrew Heaney, who has been simply dominant to this point in his minor league career.