WEDNESDAY: Bob Nightengale of USA Today reports (on Twitter) that the Dodgers will send right-handed pitcher Jonathan Martinez to the Cubs as the PTBNL. The 20-year-old was enjoying a strong season at Class A in the Midwest League, having pitched to a 3.47 ERA with 7.7 K/9 and 1.6 BB/9 in 106 innings. He did not rank among the Dodgers’ top 30 prospects, per Baseball America.

MONDAY, 5:43pm: MLB.com’s Carrie Muskat reports that the Dodgers will pay $500K of what is owed to Barney this season (Twitter link).

2:32pm: The Dodgers have bolstered their infield depth and their defense with the acquisition of Darwin Barney from the Cubs, both teams announced. Chicago will send Barney and cash considerations to Los Angeles in return for a player to be named later, according to releases from each team. It was reported earlier today that Barney, who was designated for assignment last week, was garnering trade interest. 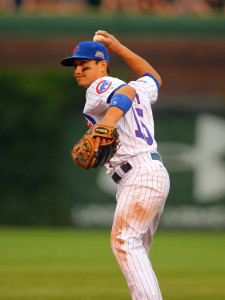 The 28-year-old Barney hit just .230/.265/.328 in 217 plate appearances with the Cubs this season, but his bat has never been his calling card. Barney consistently rates as one of the best defensive second baseman in the Major Leagues, and this year was no different. His Ultimate Zone Rating per 150 games was +15.5, while Defensive Runs Saved pegged him at +7 runs in limited time. Per DRS, Barney has  saved 46 runs over the past three seasons.

Dee Gordon has established himself as Los Angeles’ everyday second baseman this season, so it doesn’t seem likely that Barney will be seeing everyday at-bats with the Dodgers. However, his glove makes him a nice bench piece that the team can use to improve its defense late in games. Barney was drafted as a shortstop and spent more time at short than at the keystone in his minor league career. Despite a lack of experience at the position in recent years, Barney could be used as a replacement if the team wants to either replace the defensively challenged Hanley Ramirez or shift him over to third base late in games.

Barney is earning just $2.3MM this season and is controllable through 2016 as an arbitration eligible player. His bat makes him a non-tender candidate in the offseason, but he will only cost the Dodgers about $804K from here through season’s end.