4:41pm: The Red Sox have announced the deal.

2:17pm: The Cubs have acquired Felix Doubront from the Red Sox, tweets Jon Heyman of CBS Sports. Jon Morosi of FOX Sports first reported (on Twitter) that a deal was close.

The Red Sox will receive a player to be named later in return for the 26-year-old lefty, Jim Bowden of ESPN.com reports on Twitter. That player will be determined after the Rule 5 draft, tweets Alex Speier of WEEI.com. 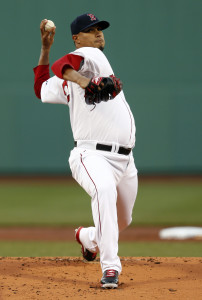 Doubront’s tenure in Boston seemed destined to come to an end after he publicly announced his desire to return to the rotation — with another team, if necessary. After beginning the year as one of the team’s five starters, Doubront was dropped to the pen after posting a 5.19 ERA over ten starts. Things have only gone downhill since, as he has surrendered a .375/.409/.625 line and 11 earned runs to the 45 opposing hitters he has faced in seven relief appearances.

Chicago will hope that a change of scenery prompts a turnaround for a player who is said to have high-quality stuff. (Over 2012-13, Doubront compiled 323 1/3 innings of 4.59 ERA ball as a starter.) He will be arb-eligible for the first time next year, and his price tag should be manageable given his rough numbers this year. In many respects, Doubront is not unlike several of the Cubs’ other recent buy-low pitching additions (both through free agency and trade) — Jake Arrieta, Jason Hammel, and Scott Feldman come to mind — though he comes with the added benefit of a lower cost and extended, uncommitted control.