The Rockies announced (via Twitter) that they have agreed to terms with left-hander Jorge De La Rosa on a two-year extension. The deal guarantees De La Rosa $25MM and contains no options, tweets Ken Rosenthal of FOX Sports. He’ll earn $12.5MM in both 2015 and 2016, tweets Chris Cotillo of MLB Daily Dish. De La Rosa is represented by agent Paul Cohen of TWC Sports. 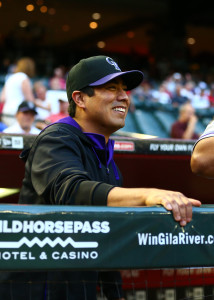 De La Rosa has seen a strong uptick in his fastball velocity this year in his second full season back from Tommy John surgery, averaging 92.3 mph on his heater after averaging 91.1 mph last season and 90.5 mph in a brief 10-inning sample back in 2012. He was set to hit free agency following the season, and as I noted earlier this year, his velocity increase from 2013 to 2014 was the second-largest of any potential free agent starter.

The Rockies have made it a known fact that they preferred to hold onto De La Rosa, which is why they didn’t entertain serious trade offers and didn’t trade him when he was claimed on waivers earlier this month. Colorado’s reported asking price on De La Rosa at the trade deadline was Kevin Gausman, when asked by the Orioles, and the team was set to make him a qualifying offer before he hit the open market, according to previous reports.

A qualifying offer would’ve given De La Rosa the opportunity to take a one-year deal worth roughly $15MM, but it also would’ve hindered his free agent stock, as has been the case with pitchers coming off solid seasons in recent years. Ervin Santana, Kyle Lohse and Ubaldo Jimenez all had lengthy journeys through free agency, though Jimenez came out well with a four-year, $50MM contract. De La Rosa’s average annual value is right in line with that of Jimenez and is greater than that of Lohse. In a broader spectrum, his $12.5MM annual salary falls in line with what other mid-rotation starters have earned in recent trips through free agency, and his two-year term is comparable to that of free agents in their mid- to late 30s (e.g. Bronson Arroyo, Tim Hudson).

De La Rosa will provide a veteran presence on a young Rockies staff that has been decimated by injuries. Tyler Chatwood has undergone Tommy John surgery, as has top prospect Daniel Winkler, while Eddie Butler and Jhoulys Chacin have both battled shoulder issues. Brett Anderson’s injury woes continued with Colorado after an offseason trade from Oakland, and fellow trade acquisition Jordan Lyles spent time on the DL this season with a broken hand (though that was more of a fluke injury). Next season, De La Rosa could be joined by Lyles, Butler and perhaps top prospect Jon Gray.

Given the difficulty that the Rockies have typically had in luring free agent starters to the launching pad that is Coors Field, the team is likely quite pleased to have retained its longest tenured starter.