JANUARY 5: The Rockies have announced the signing. Hundley will receive $6.25MM in the deal, per Jon Heyman of CBSSports.com (via Twitter), with $3.1MM coming this year and $3.15MM due for 2016.

DECEMBER 31: The Rockies have agreed to terms with catcher Nick Hundley on a two-year deal worth a bit over $6MM, Dan Connolly of the Baltimore Sun writes. The deal is pending a physical. Hundley is an Athletes First client. 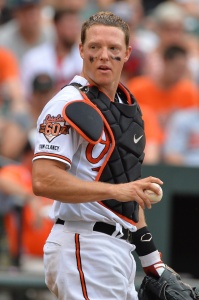 The Orioles also offered Hundley a two-year deal but did not offer as much money and could not promise as much playing time, Connolly tweets. Hundley hit .243/.273/.358 in 218 plate appearances in 2014, joining the Orioles in May after Baltimore acquired him from the Padres for Troy Patton, hoping to find catching help in the absence of the injured Matt Wieters. Wieters should be healthy for 2015, however, and the Orioles already had four other catchers on their 40-man roster (Steve Clevenger, Caleb Joseph, Michael Ohlman and the newly acquired Ryan Lavarnway).

Hundley will now join Wilin Rosario and Michael McKenry on the Rockies’ depth chart, although Rosario has been the subject of trade rumors this offseason and could ultimately be headed to the AL, where he can play DH. Hundley’s deal looks to be the biggest one for the Rockies so far this offseason — the only other player they’ve signed to a Major League deal so far is Daniel Descalso, who got two years and $3.6MM.

Hundley is generally regarded as reliable defensively. Historically, he hasn’t rated as a good framer, although he posted slightly above average framing numbers in 2014. The 31-year-old hit well early in his career, peaking with a stellar .288/.347/.477 season in PETCO Park in 2011. Since then, though, his offense has declined, perhaps beginning with a 2012 knee injury. He hasn’t posted an OPS above .679 in any of the last three seasons, and he eventually lost playing time as Yasmani Grandal and Rene Rivera emerged in San Diego. Of course, after years spent in PETCO, Coors Field could help boost Hundley’s offensive numbers.