6:26pm: The deal is now official, with the Cubs making an announcement.

6:20pm: Chicago will cover $1MM of Jackson’s remaining salary, Jon Heyman of CBSSports.com tweets. The Mariners will pay the $430K or so of obligations otherwise left on his deal.

5:04pm: The Cubs have agreed to acquire outfielder Austin Jackson from the Mariners, Shannon Drayer of 710 AM ESPN in Seattle reports (Twitter link). Jackson had reportedly cleared revocable trade waivers, and by adding him today, the Cubs will have the option of utilizing him on their post-season roster.

A player to be named later and a $211,100 international signing slot will reportedly head to Seattle in the deal. Chicago also obtains cash to offset some of the remainder of Jackson’s $7.7MM annual salary. 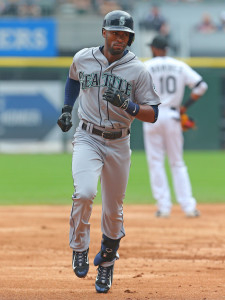 Already set to hit free agency after the season, Jackson will end his disappointing tenure in Seattle earlier than had been planned. He was acquired with high hopes last summer in the three-team David Price deal, with the Mariners sending Nick Franklin to the Rays to add the center fielder from the Tigers. Needless to say, things have not worked out for the player or the team.

At the time, Jackson was putting up slightly-above-average offensive numbers in Detroit. But he’s been significantly worse with the M’s, slashing just .257/.297/.343 over 684 plate appearances between this year and last. Jackson has contributed only eight home runs in that span as his power has fallen off, and he’s been caught 11 times on steal attempts while successfully taking 26 bags.

Jackson remains an approximately league-average defender up the middle. And at just 28 years of age, he still holds at least some promise of more given his quality early-career production. Between 2010 and 2013, Jackson racked up 18.9 rWAR with a .278/.344/.416 cumulative slash, a solid power/speed mix, and defensive ratings that ranged from good to excellent.

Mariners interim GM Jeff Kingston explained that there was relatively little interest in the veteran this month, as Ryan Divish of the Seattle Times notes on Twitter. While there had been an outside chance that the club would hold onto Jackson and make him a qualifying offer, that is no longer an option with the mid-season trade. That seemed at least plausible given Jackson’s age, but it seems that Seattle decided against the risky move and chose instead to get what it could for him now.

For Chicago, Jackson represents another right-handed-hitting outfield option as Jorge Soler deals with an oblique injury, though it’s worth noting that he traditionally carries fairly neutral platoon splits. It certainly doesn’t hurt that Jackson can play in center, but he seems unlikely to take much time from the switch-hitting Dexter Fowler, who traditionally performs better against left-handed pitching. While Jackson is still owed about $1.43MM of salary this year, at least some of that obligation will remain Seattle’s responsibility.