March 13: Desmond will undergo surgery on the second to repair the second metacarpal in his left hand on Wednesday, the Rockies announced to the team’s beat writers (Twitter link via Nick Groke of the Denver Post). The Rockies didn’t include a timetable for his recovery in their subsequent release.

March 12: Rockies first baseman Ian Desmond suffered a fracture in his left hand, the club announced to reporters (including MLB.com’s Thomas Harding).  Desmond was hit by a pitch from the Reds’ Rookie Davis during the fourth inning of today’s Spring Training contest between the two teams, and soon left the game during a pitching change.  Desmond will visit a hand specialist on Monday to determine the extent of the injury, though it seems all but certain he’ll begin the season on the disabled list.

Needless to say, this is a very unfortunate setback for both Desmond and a Rockies team that has designs on contending for a postseason berth in 2017.  This will mark Desmond’s first trip to the DL since 2012, when he missed almost a month of action recovering from a torn oblique.  Apart from that year, Desmond has been a picture of durability, appearing in at least 154 games in every other season since 2010. 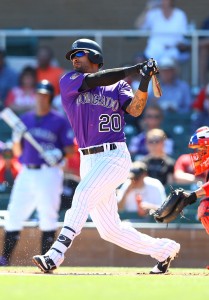 Colorado signed Desmond to a five-year, $70MM deal in December that was widely considered to be the offseason’s most surprising free agent signing.  Not only did the Rockies surrender the 11th overall pick in the draft (the highest non-protected pick) to sign the qualifying offer free agent, but the Rockies also intended to use Desmond as their starting first baseman.  Desmond was going to be playing the position for the first time in his pro career, and given Desmond’s ability to play shortstop and all three outfield spots, many questioned the Rockies’ decision to deploy such a good athlete at the least-demanding position on the diamond.

Desmond’s fractured hand continues what has already been a nightmarish spring for the Rockies.  Outfielder David Dahl will also miss the start of the year due to a stress reaction in his ribcage, rotation hopeful Chris Rusin (oblique) and reliever Chad Qualls (elbow) have both been sidelined and, worst of all, Chad Bettis has begun chemotherapy treatments in his continuing battle with testicular cancer.

The Rockies re-signed Mark Reynolds to a minor league deal last month, and the veteran now looks to be the top candidate to fill in for Desmond at first base.  Rookies Jordan Patterson and Stephen Cardullo are also potential internal solutions, with the left-handed hitting Patterson perhaps the best fit to platoon with the righty-swinging Reynolds.  The Rockies could also use Gerardo Parra (who saw some limited action at first last season) or utilityman Alexi Amarista could try out one of the few positions he has never played in his MLB career, though both could be better deployed in the outfield given Dahl’s absence.

As for external possibilities, former Rockie Justin Morneau is available on the open market, though Morneau’s ability for extended time in the field could be a question mark given his checkered injury history.  Ryan Howard, Billy Butler and Kelly Johnson are a few other notable first base names still looking to find a new team.  Colorado is also likely to explore trades or waiver claims on other first basemen who may become available as teams look to trim their rosters before Opening Day.