The Pirates have announced that they’ve traded former closer Tony Watson to the Dodgers for infielder Oneil Cruz and righty Angel German. The Dodgers were reportedly interested in the Orioles’ Zach Britton, but appear to have settled on Watson as a backup option — though he’s certainly a talented pitcher in his own right. To clear space for him on their 40-man roster, they’ve announced that they’ve designated journeyman slugger Peter O’Brien for assignment. 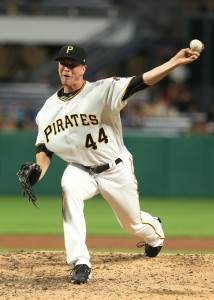 Watson carries a 2.68 ERA, 7.9 K/9 and 2.5 BB/9 over parts of seven seasons with the Pirates. The hard-throwing lefty gives the Dodgers another potential late-inning option to complement closer Kenley Jansen and another lefty to pair with Luis Avilan, although there’s no official word yet on what Watson’s role will be. He’s struggled against righties this season, allowing a .294/.360/.525 line against, but he’s had success against them in the past. He makes $5.6MM this season and is eligible for free agency in the fall.

Cruz, 18, was batting .240/.293/.342 with 110 strikeouts and 28 walks while playing shortstop and third base for Class A Great Lakes. He received a $950K bonus when the Dodgers signed him out of the Dominican Republic two summers ago. MLB.com ranked him the Dodgers’ 17th-best prospect, noting that his left-handed swing could eventually produce good power and that his size — he’s 6’6″ — makes him likely to make a permanent move to third base at some point.

The 21-year-old German had a 1.91 ERA, 10.1 K/9 and 3.8 BB/9 while pitching 33 innings of relief at Great Lakes. Perhaps unsurprisingly for a low-level reliever, he does not rank among MLB.com’s top 30 Dodgers prospects. Various online reports indicate that he throws in the mid-90s, however.

FOX Sports’ Ken Rosenthal tweeted that the two sides had struck a deal. Jon Heyman of FanRag tweeted a deal was close, with Rosenthal originally tweeting the two sides were discussing a trade. Joel Sherman of the New York Post tweeted the Pirates would receive two minor leaguers.