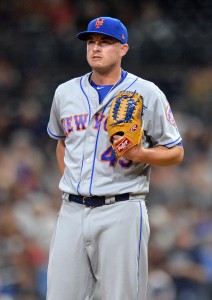 If the move is finalized, Boston would add perhaps the top rental reliever on this year’s market. Reed, who is earning $7.75MM before hitting free agency, would surely become the Sox’ top setup man for closer Craig Kimbrel. Boston will take on all of the remaining $2.6MM or so in salary, per Ken Rosenthal of MLB Network (via Twitter).

Of course, president of baseball operations Dave Dombrowski had hoped that it wouldn’t be necessary to acquire such a pitcher during the season. Two recent trade acquisitions — Carson Smith and Tyler Thornburg — were expected to be back in action by this point. At this stage, though, Boston won’t be counting on a contribution from either.

Reed came to New York in a mid-season trade back in 2015, but that one took place at the end of August — reflecting his standing at the time. He became a pleasant surprise that blossomed into quite a bit more for the Mets, who tendered him contracts for the ensuing two campaigns.

All told, the 28-year-old has provided the Mets with 142 innings of 2.09 ERA ball, backed by 9.9 K/9 and 1.5 BB/9. Though he hasn’t run up quite as many strikeouts this year as last, Reed is actually generating swinging strikes at a better clip (12.6%). And the former White Sox and D-Backs closer slid into that role again when Jeurys Familia went down, providing New York with 19 saves.

For the Mets, the deal offered a chance to get three fresh arms into a system that has graduated or traded away quite a bit of pitching in recent years. All three of the newly added hurlers rated among Boston’s top thirty prospects in MLB.com’s most recent ranking, though all profile as future relievers. Among them, Callahan is the most advanced: he’s pitching at Triple-A Pawtucket while the others are still in A ball. Tim Britton of the Providence Journal tweets that Nogosek, last year’s sixth-round pick, could be something of a quick riser through the system given his experience as a closer in college.