The Nationals have announced that they’ve acquired Twins closer Brandon Kintzler. The Twins will receive lefty Tyler Watson and the rights to international bonus spending in return ($500K worth, via a tweet from MLB.com’s Mark Feinsand). In a corresponding move, the Nationals have announced that they’ve designated righty Jimmy Cordero for assignment. 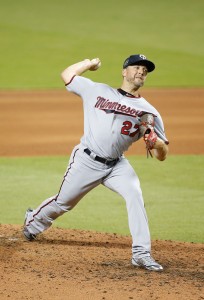 Kintzler could take over ninth-inning duties for a Nationals bullpen that has endured late struggles in recent seasons, though GM Mike Rizzo said today the precise bullpen alignment will be sorted out over the coming months. The veteran righty will become the third reliever to make his way to Washington this month, with Ryan Madson and Sean Doolittle having arrived previously from Oakland two weeks ago.

The 32-year-old Kintzler isn’t a prototypical closer, with strikeout rates of just 5.8 K/9 and 5.4 K/9 in the last two seasons. Nonetheless, he’s enjoyed success in the role those last two seasons, with a 2.98 ERA, a strong 1.7 BB/9 and 45 saves in that span. He throws his fastball in the 94-MPH range and gets good sink, leading to an excellent 57.8 career GB%. He’s making $2,925,000 this season and is eligible for free agency in the fall, making him a pure rental for the Nats.

The 20-year-old Watson earned a $400K bonus after the Nationals selected him in the 34th round of the draft in 2015. He was in the midst of a strong season with Class A Hagerstown, with a 4.35 ERA but with 9.5 K/9 and 2.3 BB/9 in 93 innings. MLB.com rated him the Nationals’ 17th-best prospect, noting that he rarely throws harder than 90 MPH but locates well, throws on a downhill plane and could add velocity as he matures.

Chelsea Janes of the Washington Post reported that the Nationals had acquired Kintzler. FOX Sports’ Ken Rosenthal tweeted that Watson was included in the deal.