The Dodgers have added another lefty, picking up Tony Cingrani from the Reds. In return, Cincinnati has acquired outfielder Scott Van Slyke and catcher Hendrik Clementina. 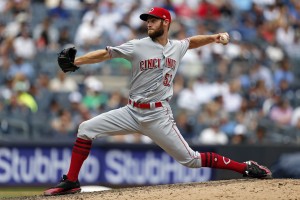 Cingrani joins Tony Watson as southpaw bullpen additions for Los Angeles, which came into the deadline looking to bolster that facet of the relief corps. The 28-year-old Cingrani has posted a mediocre 5.40 ERA on the year, but he’s carrying 9.3 K/9 with 2.3 BB/9 to go with it. The real issue thus far has been a monumental home run problem: Cingrani is allowing 3.47 per nine, with 29% of the fly balls he permits leaving the yard.

Oddly, Cingrani has struggled badly against same-handed hitters, allowing six long balls from just 43 lefties he has squared off against. That figures to balance back out somewhat, though, as he has limited lefty hitters to a .218/.305/.407 slash over his career (including this year’s ugly results).

Assuming those issues can be brought under control, Cingrani will add a power arm to the L.A. pen. He carries a 12.4% swinging-strike rate and is averaging a healthy 94.6 mph with his fastball. Cingrani represents an affordable option with some future value, too. He is earning just $1.825MM this year and can be offered arbitration over the next two seasons.

Van Slyke, 31, is another powerful corner outfield option that the Reds have added from the NL West. It’s not immediately clear whether he’ll have much function on the roster, though, and he’ll mostly offset Cingrani’s remaining salary obligations. The real motivation for Cincinnati was surely to add the twenty-year-old Clementina. He’s a Curacaoan backstop who has turned it up at the plate this year in Rookie ball, slashing .370/.439/.554 in a limited 108 plate appearance sample.

Zach Buchanan of the Cincinnati Enquirer reported that Cingrani was on the move (via Twitter). Ken Rosenthal of MLB Network (Twitter link) connected him to the Dodgers, while Joel Sherman of the New York Post tweeted the return.