The Rangers have informed first baseman/designated hitter Mike Napoli that his $11MM club option for the 2018 season will not be exercised, Evan Grant of the Dallas Morning News tweets. He’ll instead take home a $2.5MM buyout, bringing his total earnings in his third stint with the Rangers to $8.5MM. Napoli will be a free agent once the option is formally declined. 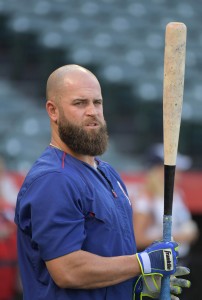 Napoli, 36 on Halloween, swatted 29 homers in his return to Arlington this season but saw his batting average check in south of the Mendoza Line and his OBP land in the upper .200s. Overall, the benefit of his considerable power (.235 ISO) was counteracted by a .193/.285/.428 batting line and below-average baserunning. Both Fangraphs and Baseball-Reference pegged him slightly worse than replacement level. Napoli struck out at a career-worst 33.6 percent clip and also popped up at a career-high 15.6 percent pace. A troublesome 38.1 percent of his trips to the plate resulted in a punchout or an infield fly.

Of course, Napoli is just a season removed from a very solid .239/.335/.465 batting line and 34 homers for the American League champion Indians. Both Defensive Runs Saved and Ultimate Zone Rating felt that he was about a run above average in nearly 800 innings at first base — the fourth time in the past five seasons that he’s ranked above average by both measures. While it’s difficult to envision Napoli securing another job as a team’s primary first baseman in free agency this offseason, his generally excellent clubhouse reputation, well-above average power and track record of mashing left-handed pitching should result in plenty of interest among contending clubs looking to utilize him in a more limited capacity.

As for the Rangers, they’ll have the option of using Joey Gallo at first base in 2018 or pursuing one of the many free-agent sluggers at first base. Eric Hosmer, Logan Morrison, Carlos Santana, Lucas Duda, Yonder Alonso and old friend Mitch Moreland are among those joining Napoli on the open market this winter. Should the Rangers bring in one of those options, Gallo could return to the corner outfield, see some time at DH and occasionally spell future Hall of Famer Adrian Beltre at third base.

Alternatively, the Rangers have one of the game’s top-regarded first base prospects, Ronald Guzman, on the precipice of MLB readiness. The 22-year-old Guzman spent the 2017 season with Triple-A Round Rock, where he batted .298/.372/.434 with a dozen homers, 22 doubles and an 85-to-47 K/BB ratio in 527 plate appearances. Texas could opt to merely pursue a stopgap option to split the first base/corner outfield workload with Gallo until Guzman forces his way onto the big league roster.