The White Sox announced on Friday that they’ve signed free agent catcher Welington Castillo to a two-year contract. One of the few teams to disclose financial terms, the White Sox confirmed previous reports that Castillo signed a two-year, $15MM contract with an $8MM club option for the 2020 season. He’ll earn $7.25MM in each season and is promised another $500K through a buyout. Castillo is represented by ACES. 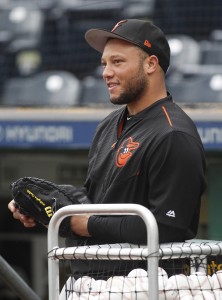 The 30-year-old Castillo is coming off one of the best seasons of his career, having batted .282/.323/.490 with 20 homers in 365 plate appearances as the Orioles’ primary backstop. With that strong offensive output in his back pocket, Castillo turned down a $7MM player option to return to Baltimore — a move that has certainly paid dividends now that he has a multi-year agreement secured.

While Castillo has long come with a questionable defensive reputation, he led the Majors with a 49 percent caught-stealing rate in Baltimore and also turned in dramatically improved pitch-framing marks in his lone season with the O’s. It remains to be seen if he can sustain that level of defensive play moving forward, but the improvements certainly didn’t hamper his free agent stock.

Though the White Sox are (obviously) in the midst of a rebuild, the team has relied on a hodgepodge of underwhelming options since making the error of non-tendering Tyler Flowers prior to the 2016 season. Castillo will help to solidify a position of need and also give the team’s up-and-coming core of young pitchers an experienced receiver behind the dish.

With Castillo in the fold, Omar Narvaez will shift from the club’s starting catcher to a reserve role, while Kevan Smith will likely be pushed off the big league roster. That pair received the majority of the White Sox’ at-bats behind the plate last season, with Geovany Soto and Rob Brantly also receiving a handful of opportunities. Overall, the South Siders’ catching corps posted a solid .279/.346/.381 batting line, though Narvaez and Smith both benefited from some help in the BABIP department, and neither offers anywhere near the pop that Castillo carries in his bat.

From a payroll vantage point, the Sox can easily fit Castillo’s salary onto the books. The Sox entered the offseason projected to field just a $61MM payroll (after arbitration estimates), with only $15.95MM of that sum coming in the form of guaranteed contracts. The only guaranteed money on the books beyond the 2018 season is Tim Anderson’s contract, which calls for just a $1.4MM salary in 2019.

Castillo may or may not fit into the expected competitive window on the south side of Chicago; the Sox aren’t expected to make an aggressive push for contention this season, though they surely like the idea of a veteran catcher helping a young pitching staff all the same. However, given the wealth of talent in the upper levels of the Sox’ farm, it’s not out of the question that they could contend as soon as the 2019 campaign — the second year of Castillo’s deal. If not, the team surely aims to be contending by 2020, and if Castillo’s play still merits an $8MM salary at that juncture, he could yet be leaned upon as part of the puzzle, depending on the development of prospect Zack Collins.

If the Sox ultimately need a bit longer to return to prominence, or if Collins ascends and pushes Castillo for the regular role, his contract is modest enough that it should contain some trade value on the open market, provided he continues to produce at a level similar to his 2017 form.