Aug. 28: The Padres have formally announced Urias’ promotion to the Majors. Asuaje has been optioned to Triple-A to open a spot on the active roster. San Diego has also placed lefty Clayton Richard on the 10-day disabled due to inflammation in his left knee and activated right-hander Colten Brewer from the disabled list in his place.

Aug. 27: The Padres are set to promote highly regarded infield prospect Luis Urias, according to Kevin Acee of the San Diego Union-Tribune. He is expected to debut tomorrow. 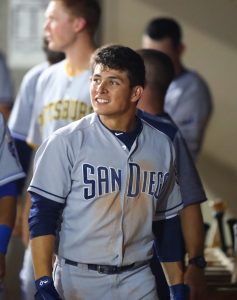 Urias, 21, is widely considered one of the crown jewels of a Padres system that, the organization has long hoped, will usher in a golden age of baseball in San Diego. There’s a clear consensus that he’s one of the most promising young players in baseball, with outlets such as Fangraphs (#22), MLB.com (#22), and Baseball America (#29) rating him among the game’s thirty or so best prospects.

There’s a lot to like about Urias’s potential as a hitter. He features a rare combination of plate discipline and contact ability that has allowed him to hit over .300 while carrying nearly a .400 OBP over his five minor-league seasons. Power isn’t a strong suit, though Urias has increased his home-run output over recent campaigns and this year has put the ball over the fence eight times in 533 plate appearances.

It seems fair to note, too, that Urias has the kind of underlying skills that could allow him to come into more power at the game’s highest level. In recent years, we’ve seen several players — Jose Altuve, Francisco Lindor, and Jose Ramirez among them, to take a few famous examples — develop surprising pop after reaching the bigs. Whether or not Urias is destined for that kind of outcome obviously isn’t yet known, but it seems notable that MLB.com credits him with more raw power than his outcomes indicate while BA cites Urias’s impressive exit velocity.

To be sure, Urias would likely generate even greater excitement if he was considered a future shortstop. Still, he is also valued for his defensive potential. Most evaluators indicate that he’ll likely be a high-quality defender at second base. It doesn’t hurt that he’s considered at least capable of playing shortstop as well; indeed, Acee says that Urias will get some time there upon his arrival.

For the Padres, this promotion offers an opportunity to get a look at a player who’s expected to hold down an important role for years to come. Urias will not accrue enough service time this year to put himself on track for future Super Two status. If he stays in the majors from here on out, he won’t be eligible for free agency until at least 2025. Picking up thirty-plus days of MLB action will make it a bit harder for the Friars to hold Urias down to open the 2019 season in hopes of extending the team’s control rights.

If he shows well upon his arrival, Urias will likely enter camp next year as the odds-on favorite to open the season as the regular second baseman. San Diego has not received much production from its options at the position thus far in 2018, after all, so the organization is no doubt anxious to plug in a permanent piece. Jose Pirela, Carlos Asuaje, and Cory Spangenberg have all failed to take advantage of opportunities at second this season.