The Nationals have reportedly agreed to re-sign righty Jeremy Hellickson to a one-year, MLB contract. Hellickson, a client of the Boras Corporation, will earn a $1.3MM base rate and could achieve up to $4MM in incentive pay. 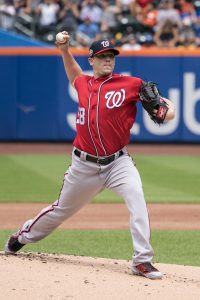 Hellickson commands a big league roster spot after a productive 2018 season in D.C. Otherwise, the deal is rather similar to the one he took last year, a minor-league arrangement with a $2MM MLB salary and $4MM incentive package that ultimately paid dividends for both player and team.

Hellickson ultimately threw 91 1/3 innings over 19 starts, producing a 3.45 ERA for the Nats. The club rarely allowed him to face an opposing order for a third time. And understandably so: Hellickson was tagged for a .419/.500/.721 slash by the fifty opposing hitters that stepped into the box against him after two prior looks.

Even with that judicious deployment accounted for, ERA estimators weren’t totally sold on the outcome. Odds are, the Nats also would anticipate Hellickson regressing toward the levels of productivity that the metrics support. Still, for a fifth rotation/long-man candidate, those numbers — FIP (4.22), xFIP (4.27) and SIERA (4.33) — were rather promising.

It’ll be interesting to see how the Nationals approach their roster this spring. The club invested heavily to add Patrick Corbin at the top of the staff and committed to veteran Anibal Sanchez as a number-four starter. With Hellickson back in the fold, younger hurlers Joe Ross and Erick Fedde may be on the outside looking in. Those pitchers could end up winning a rotation job in camp, checking down to a bullpen job, or starting the season on optional assignment.