Mar. 2: Sportsnet Canada’s Ben Nicholson-Smith reports that Buchholz’s deal will be of the MLB variety when complete.

Feb. 28: MLB Network’s Jon Heyman tweets that the Buchholz deal, if finalized, would pay him “about” $3MM and contain another $3MM worth of incentives. Notably, the agreement is still pending a physical.

Feb. 28: The Blue Jays are set to sign right-hander Clay Buchholz, reports Mark Feinsand of MLB.com (via Twitter). The ISE Baseball client will be the second pickup of the past couple hours for Toronto, as the Jays quite recently agreed to terms with righty Bud Norris on a minor league pact as well. 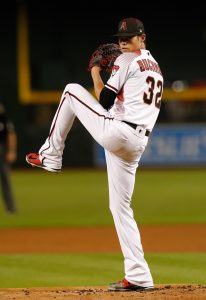 Buchholz, 34, opened the 2018 season with the Royals’ Triple-A affiliate, and Kansas City’s decision to cut him loose on May 1 proved to be a substantial misstep. The longtime Red Sox hurler caught on with the Diamondbacks, where he was a familiar face for GM Mike Hazen and several Arizona staffers who cut their teeth in the Boston organization. The Royals’ loss was the D-backs’ gain, as Buchholz turned in a masterful 2.01 ERA with 7.4 K/9, 2.0 BB/9, 0.82 HR/9 and a 42.6 percent grounder rate in 98 1/3 innings out of the Arizona rotation.

To be fair, Buchholz benefited from an unsustainable 86.6 percent strand rate and also had good fortune on balls in play (.255 BABIP), but virtually any metric pegged him as a resurgent, MLB-caliber rotation piece in his time with the Snakes (3.47 FIP, 4.01 xFIP, 4.08 SIERA). The veteran hurler looked to be well on his way to positioning himself as a solid candidate for a big league deal this winter, but as has happened to Buchholz on so many occasions in the past, his arm didn’t hold up through season’s end. The Diamondbacks announced in mid-September that a flexor mass strain in Buchholz’s right arm had preemptively ended his season.

Following that injury, it was a quiet offseason for Buchholz. Though he said at the time of the injury that he expected to be ready to pitch in Spring Training, there’s been nary a word on the status of his recovery from that injury. Presumably, the Jays will have an update on Buchholz’s health if and when the reported agreement between the two sides is formally announced by the team. At this juncture of the offseason, a minor league pact seems likely, though one could certainly argue that Buchholz’s 2018 performance merits a guaranteed spot on the 40-man roster.

Buchholz will give the Jays some rotation depth, adding to a group that already features Marcus Stroman, Aaron Sanchez, Ryan Borucki, Matt Shoemaker and Clayton Richard. It’s not clear right now whose spot Buchholz would be overtaking were he to crack the Opening Day rotation, though Sanchez and Stroman are locks to occupy spots, health permitting, and Shoemaker seems likely to do so as well.