The Braves have acquired right-handed closer Shane Greene from the Tigers for left-hander Joey Wentz and outfielder Travis Demeritte, per an announcement from Atlanta. 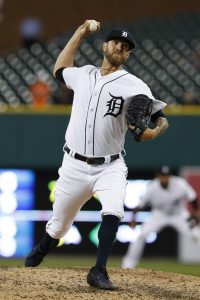 Greene has posted excellent results this year, but as a reliever with waning control on a rebuilding team, he has looked like an obvious trade candidate throughout the campaign. The 30-year-old’s on a $4MM salary this season and comes with arbitration eligibility for another winter.

Greene, who has 22 saves on 25 attempts this season, may take over as the Braves’ closer immediately. Luke Jackson has been serving in the role, though he has blown seven saves on 24 tries. Plus, while Jackson has done good work for most of the year, he has endured an awful stretch in which he has yielded seven earned runs in six appearances dating back to July 12. With Jackson struggling and the NL East-leading Braves lacking an abundance of dependable relievers aside from him, they’ve now reeled in Greene, former Rangers righty Chris Martin and ex-Giants righty Mark Melancon since Tuesday evening.

Wentz, 21, joined the Braves as a sixth-round pick in 2016. He entered the season as the Braves’ 11th-ranked prospect, according to FanGraphs’ Kiley McDaniel and Eric Longenhagen, who noted at the time injuries and inconsistency have held Wentz back. He has gotten his first taste of Double-A action this season and put up a 4.72 ERA/4.36 FIP with 8.74 K/9 and 3.93 BB/9 over 103 innings.

The 24-year-old Demeritte did not rank among FanGraphs’ top Braves prospects entering the season, but they noted then he possesses “easy plus power and is passable at multiple positions defensively.” Demeritte has since slashed an outstanding .286/.357/.558 with 20 home runs in 399 plate appearances in his Triple-A debut. A first-round pick (No. 30) of the Rangers in 2013, Demeritte became a Brave via trade in 2016. He’s now on the move again.