6:04pm: The Cubs have formally announced the signing.

3:50pm: The Cubs have finalized their one-year, Major League contract with free agent outfielder Steven Souza Jr., per MLB.com’s Mark Feinsand (Twitter link). The two sides were first reported to be nearing an agreement on Friday. Souza, who is represented by ACES, will receive a $1MM base salary and can earn another $2MM via incentives, Jordan Bastian of MLB.com tweets. The team has yet to formally announce the signing. 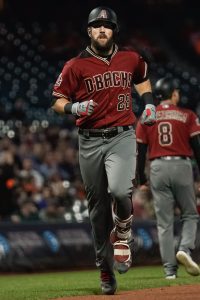 It’s sure to be a low-cost deal for the Cubs, as Souza missed the entire 2019 season due to a devastating knee injury and hasn’t enjoyed a full, healthy year since a terrific 2017 campaign with the Rays. That year saw Souza turn in a .239/.351/.459 slash with career-highs in home runs (30), doubles (21), stolen bases (16) and plate appearances (617). Souza was traded to the Diamondbacks that offseason and immediately hit by injuries — namely a pectoral tear that wiped out more than half of his season and limited him to a .220/.309/.369 slash when on the field.

Bringing Souza into the fray gives the Cubs another option in what already looked like a somewhat crowded outfield mix. Kyle Schwarber, Albert Almora Jr., Jason Heyward and Ian Happ are already lined up to share playing time as is. Third baseman Kris Bryant, too, has seen work in the outfield corners in each of the past five seasons. There are already plenty of question marks surrounding a potential trade involving Bryant — first and foremost centering around an ongoing service time grievance — and bringing another corner outfielder onto the roster will only spark some further speculation about other dealings.

The Souza pickup is the latest in a string of budget-friendly acquisitions from a Cubs front office that has been handcuffed both by the uncertainty surrounding Bryant’s status and by payroll constraints set forth by the Ricketts family ownership group. Chicago reportedly agreed to a tiny $850K deal with reliever Jeremy Jeffress earlier today and has otherwise made a string of minor league signings or non-guaranteed MLB deals (Dan Winkler, Ryan Tepera).