8:12pm: The deal is official. Wisler has a chance to earn an additional $500K in performance bonuses, Alex Pavlovic of NBC Sports Bay Area tweets.

9:15am: The Giants are in agreement with righty Matt Wisler on a one-year, $1.15MM contract for the 2021 season, pending a physical, Ken Rosenthal of The Athletic reports (via Twitter). Wisler was recently a surprise non-tender by the Twins on the heels of a strong 2020 season. The Giants will be able to control Wisler through the 2022 campaign via arbitration. 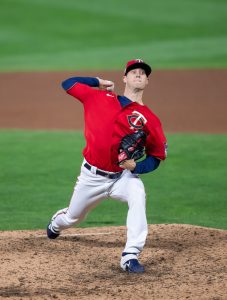 Wisler, 28, was a waiver claim by the Twins last offseason but emerged as a key bullpen piece in 2020, racking up 25 1/3 frames with a pristine 1.07 ERA on the year. He punched out 35 hitters in that time (12.4 K/9) and recorded a strong 13.9 percent swinging-strike rate, although control issues and good fortune in terms of stranding runners also led fielding-independent metrics to cast a more negative light on his season.

Wisler walked 14 batters (5.0 BB/9) and hit another pair while stranding an unsustainable 99 percent of the runners he allowed. The resulting 3.35 FIP and 4.00 SIERA weren’t quite as rosy as that more rudimentary ERA.

That said, Wisler is still an intriguing addition for a Giants club that is known to be in the market for bullpen help. While he’s not a marquee name by any stretch of the means, Wisler is a former high-end pitching prospect who washed out as a starter but has been more interesting in a bullpen role.

This past season with the Twins, he leaned more aggressively into his slider usage than any pitcher in MLB, tossing the pitch at a ridiculous 83.4 percent rate. The 16.6 percent clip at Wisler threw his four-seamer was just enough to keep hitters off balance, and though they surely knew the slider was coming more often than not, that predictability didn’t matter; in the 92 plate appearances that ended with a Wisler slider, opponents posted a pitiful .148/.250/.222 batting line.

The Twins seemingly weren’t sold on Wisler’s ability to maintain his output. They wrapped up arb deals with all of their players who were tendered contracts prior to or just after last week’s tender deadline. Since cutting Wisler loose, president of baseball ops Derek Falvey has explained that the team couldn’t come to terms with Wisler on a mutually agreeable number but would still be open to a reunion. That won’t happen now, leaving another hole to be filled in the Minnesota ’pen.

With the Giants, Wisler will join a pretty wide-open late-inning mix. Tyler Rogers, Sam Coonrod, a returning Reyes Moronta and rebound hopeful Trevor Gott comprise the team’s top right-handed options at the moment, while Wandy Peralta and Jarlin Garcia are the most experienced southpaw options of the bunch. Wisler could eventually work his way into some high-leverage spots if he can build on his 2020 success, though he also served as an opener in Minnesota and could be an option to do so with San Francisco as well, depending on how their rotation shapes up.