The Red Sox and Reds have announced a deal that will send outfielder Tommy Pham to Boston. Cincinnati will receive a player to be named later or cash considerations in return.

It’s a bit of a surprising move for a Boston team that just agreed to deal away its primary catcher, Christian Vázquez, to the Astros. Yet Red Sox president of baseball operations Chaim Bloom has maintained they’re not approaching the deadline with a strict “buyer’s” or “seller’s” mentality. Rather, Boston has taken a flexible approach that has seen them ship out Vázquez and listen to offers on designated hitter J.D. Martinez while bringing in players like Pham and backstop Reese McGuire. The Sox enter play Monday 3 1/2 games out in the American League Wild Card race, leaving them to navigate a difficult position for the stretch run. 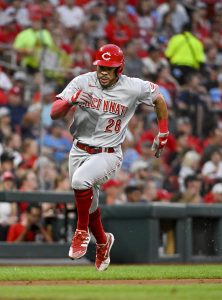 Boston is trying to thread a needle of gaining some long-term talent while not completely punting on the 2022 campaign, and it stands to reason further moves are on the horizon. In Pham, they add a right-handed bat to a corner outfield mix that has been very disappointing. Left fielder Alex Verdugo has underwhelmed to the tune of a .269/.308/.376 showing with just six homers in 402 plate appearances. The club’s right fielders — primarily Jackie Bradley Jr. — are hitting .199/.262/.316.

Pham, who signed a one-year deal with the Reds in Spring Training, has been a bit more productive than Boston’s incumbent corner outfielders. The 34-year-old owns a .238/.320/.374 line with 11 homers in 387 trips to the plate. His 10.9% walk rate, while a career low, is still a bit better than league average. He consistently makes a fair amount of hard contact, although his power output hasn’t aligned with his above-average exit velocities. That’s largely because Pham hits plenty of ground-balls, but he should nevertheless represent an offensive improvement over the Sox’s internal options.

With Cincinnati, Pham played exclusively left field or designated hitter. He figures to see the bulk of his playing time in Fenway in left, with Verdugo presumably kicking to right field and curtailing Bradley’s playing time. Bloom was in the Rays front office during Pham’s peak days with Tampa Bay, and he’s clearly hopeful the veteran outfielder can rediscover something resembling that productive form.

Pham is making $6MM this season, with a bit more than $2MM of that left to be paid. There’s no mention of cash considerations, so it seems Cincinnati will save a bit of money for stretch run. The Reds are likely to get a minor prospect for a player who’d been slated to hit the free agent market after this season.