Nov. 17: The Padres formally announced a five-year deal for Suarez, which indeed includes an opt-out after the 2025 season.

Nov. 12: The Padres have made a massive strike to keep one of their top free agents. San Diego is reportedly in agreement with reliever Robert Suarez on a five-year, $46MM guarantee that allows him to opt out after the 2025 campaign. Suarez, a Don Nomura client, had declined a $5MM player option earlier this week.

That was a formality, as he was always likely to land a significant multi-year pact on the open market. Just as the time came for him to potentially speak with other teams, he and the Padres pushed a new deal across the finish line.

The new contract will reportedly pay Suarez $10MM in each of the next three seasons. If he were to opt out after 2025, he’d be leaving $16MM on the table, which breaks down as $8MM salaries in each of the 2026 and 2027 campaigns. There is also some notable annual bonus money available related to games finished, and those incentives kick in whenever Suarez finishes at least 25 games in a season. The bonuses max out at $3MM if he reaches 55 games finished.

Suarez had never played in the majors before this year. The Venezuela native had spent five seasons at Japan’s highest level, working late innings for the Fukuoka Softbank Hawks. The Friars signed him to a two-year deal last winter that allowed him to opt out after the 2022 season, taking a shot on a live arm with a history of success in Japan. The gamble his stuff would play against big league hitters paid off in spades, as he emerged as one of manager Bob Melvin’s top late-inning weapons.

During his first MLB appearance, Suarez walked two batters and hit a third. He failed to record an out and all three runners came around to score. It was a nightmarish debut, but the 31-year-old bounced back in a huge way. From the second day of the season onward, he pitched to a 1.70 ERA through 47 2/3 innings. Suarez punched out an elite 32.4% of batters faced along the way. His 10.1% walk percentage was still a bit higher than ideal, but he had no issue overpowering opponents while brandishing eye-popping stuff. 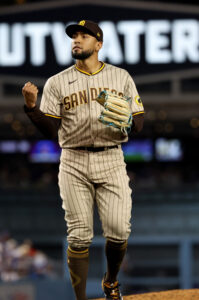 Suarez averaged 97-98 MPH on his fastball, backed up by an upper-80s changeup that served as his put-away offering. He only picked up one save, but he held 11 leads and worked in high-leverage situations throughout the year. Aside from the Opening Day blip, the only negative in his regular season showing was a two-month absence due to right knee inflammation. His stuff was no worse for wear upon his return in mid-August and the Friars clearly don’t harbor any concerns about his long-term health projection.

The postseason ended on a sour note for both Suarez and the Padres, as he was on the mound for what proved to be a season-ending home run allowed to Bryce Harper in the NLCS. He’d pitched his way out of a number of jams earlier in the playoffs before that dramatic at-bat against Harper, and he finished the postseason with a respectable three runs allowed in nine innings. The power stuff he showed along the way bolstered his market value on the eve of his return trip to free agency, and Suarez now cashes in with one of the best free agent deals for a non-closing reliever.

Suarez becomes the fourth reliever in the past decade to land a five-year guarantee. The previous three — Kenley Jansen, Aroldis Chapman and Edwin Díaz (who inked his deal last week) — each had closing experience and multiple seasons of big league success under their belt. That’s also true of players like Wade Davis, Liam Hendriks, Mark Melancon and Raisel Iglesias — who all bested a $46MM total over four or fewer seasons. Suarez’s track record of one-year dominance in the middle innings perhaps most closely compares to his now-teammate, Drew Pomeranz, who landed $34MM over four years during the 2018-19 offseason after an incredible second half in his platform campaign.

It’s a strong milestone for Suarez and his representatives that also keeps him with the club that gave him his first big league opportunity. He’ll return as a high-leverage piece for Melvin, joining Josh Hader, Luis García and a hopefully healthy Pomeranz in the late-game mix. Meanwhile, the successive early re-signings of Díaz and Suarez remove arguably the two best relievers from this winter’s free agent class.

The specific financial breakdown has yet to be reported. The Friars currently have around $203MM on next year’s books, in the estimation of Roster Resource. Their projected luxury tax ledger sits just shy of $225MM, and Suarez’s deal will add another $9.2MM to that tab. A contract’s luxury tax hit is determined by its average annual value, and the final two years of the deal are still considered guaranteed even though Suarez will have the chance to opt out of the arrangement. The Padres look likely to surpass next season’s $233MM base tax threshold, but ownership and the front office have shown no qualms about doing so in an effort to build one of the best rosters in the National League.

Jon Morosi of MLB.com was first to report Suarez and the Padres were in agreement on a five-year, $46MM deal. Ken Rosenthal of the Athletic reported the specific salary breakdown.