Jan. 20: Pham has passed his physical, tweets Nightengale. The outfielder will earn a $200K bonus upon reaching 225 plate appearances with the Mets, and he’ll unlock additional $200K bonuses for every 25th plate appearance thereafter, all the way up through 450 plate appearances. With the physical complete, the Mets should announce the deal sooner than later.

Jan. 18, 10:26am: It’s a one-year, $6MM contract for Pham, tweets Jon Heyman of the New York Post. USA Today’s Bob Nightengale adds that the contract contains $2MM of available incentives and is expected to be finalized Thursday.

10:08am: The Mets and Pham have agreed to terms on a contract, Martino tweets. The deal is pending a physical.

9:44am: The Mets have an offer on the table to free-agent outfielder Tommy Pham and is optimistic about completing a deal, reports SNY’s Andy Martino. The Mets also made offers to Andrew McCutchen and Adam Duvall, per the report, but McCutchen preferred to go back to his original team in Pittsburgh while Duvall had the opportunity for more playing time in Boston. 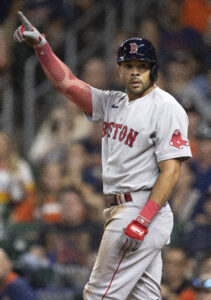 Additionally, Pham’s batted-ball profile also serves as a portent for increased production in the future. His 92.2 mph average exit velocity ranked in the 93rd percentile of all big league hitters, while his 48.2% hard-hit rate ranked in the 89th percentile, per Statcast. Even if bat doesn’t bounce all the way back to the levels those numbers suggest, there’s a good chance he can be a useful platoon option. Also, Pham also still drew favorable rankings for his arm strength in the outfield (74th percentile) and average sprint speed (66th percentile). Defensive metrics panned his glovework on the whole (0 DRS, -6 OAA), but the tools are there for him to rebound in that capacity as well.

From 2015-19, Pham was one of the game’s most underrated outfielders, batting a combined .277/.373/.472 (130 wRC+) with a hefty 12.2% walk rate against a 23.3% strikeout rate. He’s been a slightly below-average hitter overall since that time, but given his speed, arm strength and solid production against lefties, he’s a nice bat to have on the bench.

Pham is mostly limited to left field at this point in his career — he has just 91 innings in center field an seven in right field since 2018 — but he’ll give the Mets some outfield insurance while perhaps serving as a right-handed complement to lefty DH Daniel Vogelbach. That’s especially true if the Mets look to move on from Darin Ruf after a disappointing couple months in Queens following last year’s acquisition at the trade deadline.

While Pham himself might not be a backup option to Brandon Nimmo in center field, adding him to the mix provides the Mets with some additional cover in the event of an outfield injury. For instance, both left fielder Mark Canha and (especially) right fielder Starling Marte have experience in center field, so either could shift to center should Nimmo need a day off or a trip to the IL, with Pham then slotting into left field and Marte/Canha covering the other two outfield slots.

The Mets also have 24-year-old Khalil Lee as a lefty-hitting outfielder who can fill in at all three spots, though he has a minor league option remaining. Pham’s addition creates the possibility of sending Lee to Triple-A Syracuse for regular playing time — a luxury the team may not have previously been able to afford. Previously, the Mets’ only outfielders on the 40-man roster all projected to be on the big league roster as well, so the extra depth fills a clear need.

On top of Pham’s $6MM, the Mets owe a 90% luxury tax of $5.4MM, bringing their total tab for the signing to $11.4MM. New York’s projected bottom-line payroll for the 2023 season jumps to a bit more than $356MM, with about $374MM in luxury-tax considerations on the books. That puts them in well into the top luxury bracket and sets the stage for the Mets to be a third-time payor in the 2024 season, which point they’d owe an even steeper 110% tax on every dollar spent above the top line. Owner Steve Cohen has shown little concern with such penalties, however, and Pham’s luxury hit will be a relative drop in the bucket compared to the sum the Mets were planning to pay Carlos Correa before concerns regarding his medicals scuttled the 12-year deal between the two parties.