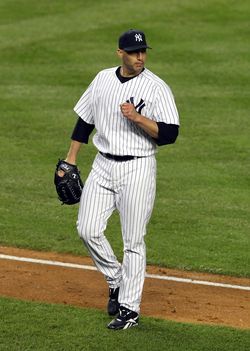 The Yankees announced that they have signed Andy Pettitte to a one-year, Major League contract. Ken Davidoff of the New York Post, who first reported the deal, adds that it's worth $12MM (on Twitter). The contract also includes $2.5MM in awards bonuses according to Mark Feinsand of The New York Daily News (on Twitter). Excel Sports Management now represents the 40-year-old left-hander.

The Yankees' rotation now looks considerably stronger than it did earlier in the month. They recently signed Hiroki Kuroda, who joins C.C. Sabathia, Phil Hughes and Ivan Nova in the team's rotation. David Phelps and even Michael Pineda could also contribute as starters.

ESPN.com's Buster Olney first reported the sides were nearing a deal. Mike Axisa contributed to this post. Photo courtesy of US Presswire.

7:28pm: Pettitte has committed to playing next year but no deal has been reached yet between the pitcher and the Yankees, a source told Mark Feinsand of the New York Daily News (via Twitter).

7:20am: Andy Pettitte is close to formally announcing he's going to pitch again in 2013, ESPN.com's Buster Olney reports. Furthermore, the free agent left-hander is close to finishing a new contract with the Yankees, according to Olney. The deal is expected to be worth a bit more than $10MM, Jon Heyman of CBSSports.com reports (on Twitter). Joel Sherman of the New York Post suggests the deal will likely be for $10-11MM (Twitter link).

If the Yankees complete a deal with Pettitte, their rotation will look considerably stronger than it did earlier in the month. They have also signed Hiroki Kuroda, who joins C.C. Sabathia, Phil Hughes and Ivan Nova in the team's rotation. David Phelps and even Michael Pineda could also contribute as starters.

Rosters and Rumblings, a new podcast featuring MLBTR's Ben Nicholson-Smith and Jason Martinez of MLB Depth Charts, debuted today. Check out the inaugural episode for discussion of Evan Longoria’s new deal, Jonathan Broxton’s contract talks with the Reds and B.J. Upton’s impact on the NL East. Speaking of the baseball's eastern divisions, here are some links…

A friend of Andy Pettitte's told Jon Heyman of CBSSports.com that he expects the left-hander to decide on his plans for 2013 by the end of next week (Twitter link). The Yankees have yet to offer Pettitte a contract, but they remain interested in bringing him back as a member of their 2013 rotation.

Earlier this week Joel Sherman of the New York Post wrote that the Yankees expect Pettitte to return for another season. However, the 40-year-old will likely seek a raise from his 2012 salary of $2.5MM. Pettitte, who is now represented by Excel Sports Management, pitched well in 12 regular season starts this past season before making two quality starts in the postseason. He posted a 2.87 ERA with 8.2 K/9 and 2.5 BB/9 in 75 1/3 regular season innings in 2012.

On this date in 1957, Yankees outfielder Mickey Mantle won the AL MVP, narrowly edging out Ted Williams of the Red Sox for the award. Williams had superior numbers on a per at bat basis, but Mantle played in more games, had more wins above replacement and the Yankees won the pennant. Here are today's AL East links…

While Jeremy Guthrie’s three-year, $25MM contract prompted some to question the Royals, the deal was considered fair in front offices of some other teams, ESPN.com’s Buster Olney reports. Some executives think of the contract as reasonable given Guthrie’s durability at the MLB level. Here are more notes from Olney…

The Yankees' new deal with Hiroki Kuroda is the biggest baseball story out of the Big Apple today, but here are some more items from both the Yankees and the Mets…

5:12pm: The Dodgers "are not in" on Kuroda, an industry source tells Mark Feinsand of the New York Daily News (Twitter link).  Feinsand adds that the Angels appear to be out of the running for Kuroda as well.

4:00pm: The Yankees are seen as the favorites to sign free agent starter Hiroki Kuroda, Jon Heyman of CBSSports.com reports. In fact the Yankees are "very confident" they'll sign Kuroda, according to ESPN.com's Jayson Stark. Stark suggests Kuroda will pitch for the Yankees if he's pitching in MLB next year. However, Heyman reports that the Yankees sense a threat from Japan, where Kuroda pitched before joining MLB.

The Dodgers, Angels and Red Sox have also expressed interest in Kuroda, who is linked to draft pick compensation after declining a qualifying offer from the Yankees. It appears the Dodgers and Angels are shifting their focus elsewhere, Stark writes. The Dodgers are now pursuing Zack Greinke, Anibal Sanchez, Ryan Dempster and others, according to Stark. The Angels are also targeting Greinke.

The Yankees feel good about talks with Mariano Rivera so far, Heyman reports (on Twitter). They still haven't officially heard whether Andy Pettitte intends to return for another season in 2013.

Earlier today we had some news on the Mets, now let's travel to the other side of town and check in on the Yankees…