The Diamondbacks have released infielder Joaquin Arias, as per the club’s official Twitter feed.  The veteran had been in Arizona’s camp on a minor league contract.

Arias had appeared in parts of eight MLB seasons since 2006, with the majority of his action coming in the form of 321 games played with the Giants from 2012-14.  Arias played primarily at third base in San Francisco but also saw significant time at second and short.  While he didn’t hit much (a .644 OPS in 784 PA) during that stint, Arias was a valuable utility piece for the Giants and he earned two World Series rings along the way.  He only appeared in 40 games for the club in 2015 and was outrighted off the 40-man roster in August.

The Diamondbacks’ crowded infield situation made it difficult for Arias to find a job.  Jean Segura, Chris Owings and Jake Lamb are slated to start with Nick Ahmed, Brandon Drury and Phil Gosselin all in the mix for backup roles, leaving Arias with no room.

Arias, 31, has spent the last four years as a utility infielder for the Giants, hitting .262/.286/.346 over 843 plate appearances with San Francisco (plus a cool 5-for-12 over 12 career postseason PA for two of the Giants’ World Series-winning teams.)  He’s seen lots of time at second, third and short with defensive metrics indicating that the hot corner is his best defensive position.  Arias played in only 40 games in 2015, and was both designated for assignment and then outrighted off San Francisco’s 40-man roster last summer.

Playing time could be hard to come by for Arias in Arizona since the D’Backs are already deep in infield options.  The signing could be a hint that the Snakes are planning to move another infielder, or (perhaps more likely) Arias is being signed to provide Triple-A depth.

The Giants have designated infielder Joaquin Arias for assignment, Alex Pavlovic of CSN Bay Area reports on Twitter. His roster spot was needed for the activation of Nori Aoki.

THURSDAY: The Giants have avoided arbitration with utilityman Joaquin Arias by agreeing to a two-year deal worth $2.6MM, according to Andrew Baggarly of CSN Bay Area (on Twitter).

Arias, 29, exchanged arbitration numbers Friday of last week, with Arias submitting a $1.5MM figure and the Giants countering at $1.1MM. The MVP Sports Group client agreed to an average annual value at the midpoint of those two numbers, indicating that he was willing to sacrifice some potential earnings in 2015 for a guaranteed two-year payday.

In two seasons with the Giants, Arias has produced a .270/.296/.369 batting line with six homers and six stolen bases in 580 plate appearances. He's capable of playing shortstop, third base and second base, although he is only a plus defender at third base, according to Ultimate Zone Rating and Defensive Runs Saved. He'll remain the primary backup for third baseman Pablo Sandoval, shortstop Brandon Crawford and second baseman Marco Scutaro as the Giants look to turn their fortunes and return to the postseason in search of a third World Series title in five years this coming season.

With this extension, the Giants have bought out each of Arias' remaining years of arbitration eligibility, meaning he will be a free agent upon its completion. Brandon Belt is the Giants' lone remaining arbitration case, as can be seen in MLBTR's Arbitration Tracker. He filed for $3.6MM, and the Giants countered with $2.05MM.

We'll track the day's arbitration settlements under $2MM here. Be sure to use MLBTR's Arbitration Tracker for all the details related to this year's cases…

After getting caught up on the details of the Dodgers sale earlier this evening, let's take a look at other news out of the National League West..

Here's where we'll track today's minor moves, most of which were reported by Kevin Goldstein of Baseball Prospectus on Twitter…

August transactions don't boast the same excitement as their July counterparts, but they can still have ramifications for contenders and non-contenders alike. Teams readying for the postseason will often fine-tune their rosters by adding a specialty piece — a LOOGY or power bat off the bench, for example — and ones looking ahead to next year will look to shed payroll.

There's still a few days left before September arrives, and prominent players such as the Rays' B.J. Upton was claimed as recently as Friday. But in the meanwhile, here's a look back at some of the bigger names who were on the move — whether by trade or waiver claim — in August 2010, and the subsequent fallout (for the complete list, check out MLBTR's Transaction Tracker): 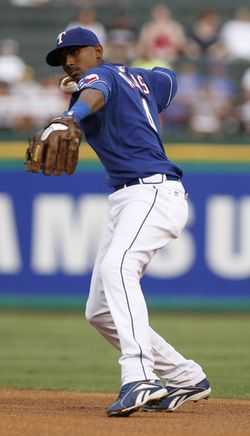 The "player to be named later" is one of baseball's many transactions  quirks. They must be named within six months of the trade, but are often agreed upon by the two teams long before that. Sometimes the November 40-man roster freeze gets in the way, sometimes it's because a player just signed his first professional contract and isn't eligible to be traded yet (a player can not officially be traded until a year after he signs his first contract). Sometimes it's just a placeholder, a piece of the puzzle the two clubs will figure out later.

Currently part of the Royals organization, Joaquin Arias knows what being a PTBNL is like. The Yankees signed him out of the Dominican Republic as a 16-year-old back in 2001, giving him a $300K signing bonus. They then watched him hit a respectable .300/.338/.394 with 12 walks and just 16 strikeouts in 218 plate appearances with their rookie level Gulf Coast League affiliate the following year. He impressed the Yankees enough that they bumped him up to their Low-A affiliate in 2003, when he was still just 18. Arias hit just .266/.306/.343 in 520 plate appearances that year, but he dazzled scouts with "plus-plus range and speed" to go along with "outstanding bat speed and raw power" according to Baseball America.

Unfortunately for Arias, he would never advance further in the Yankees' system. Seven years ago today, the Rangers officially acquired him from New York as the player to be named in the Alex Rodriguez trade. Texas chose Arias from a pool of five prospects that included Robinson Cano and current Astros' reliever Jose Valdez. At the time, Arias was ranked as the fourth best prospect in the Yankees' system by Baseball America while Cano ranked sixth and Valdez placed 21st.

Arias climbed the minor league ladder steadily after the trade, making his Major League debut in 2006. He bounced back and forth between Triple-A and the minors for the next few seasons, not sticking in the big leagues for good until he was out-of-options in 2010. Overall, he hit just .286/.322/.279 in 242 career plate appearances for the Rangers before being traded to the Mets for Jeff Francoeur last summer. Although his career has been unremarkable thus far, Arias will always be able to say that he was traded for one of the greatest players in baseball history, even if he had to wait a few weeks to be included.