The Mariners have announced that they’ve designated infielder/outfielder Richie Shaffer for assignment. The move clears roster space for incoming starting pitcher Chris Heston, who was acquired in a trade with the Giants that is now official.

The Mariners acquired Shaffer (along with Taylor Motter) in a small deal with the Rays last month. The 25-year-old Shaffer was the 25th overall pick in the draft in 2012. He’s spent parts of the past two seasons in the big leagues, batting .213/.310/.410 in 142 plate appearances. He was unimpressive in a larger sample this year at Triple-A Durham, batting .227/.329/.367 in 496 trips to the plate. He had a strong year on the farm in 2015, swatting 26 homers, and he’s capable of playing first base, third base or right field, so it’s not impossible a team could take a chance on him as a waiver claim. 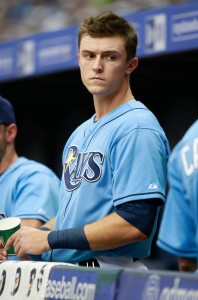 The 25-year-old Shaffer (pictured) was the 25th overall pick in the 2012 draft but has yet to live up to cement himself as a Major League contributor. He’s spent parts of the 2015-16 seasons at the Major League level, hitting .213/.310/.410 in 142 plate appearances. He’s been considerably more productive at the Triple-A level, where he’s slashed .243/.338/.445 with 30 homers in 188 games. The right-handed-hitting Shaffer has experience at all four corner positions but has spent the majority of the time at first base. In his big league career, he’s actually been better against right-handed pitching than left-handers, but he doesn’t come with much of a platoon split looking back throughout his minor league career.

Motter, 27, made his big league debut with Tampa Bay in 2016 and hit .188/.290/.300 in 93 plate appearances while seeing time at all four infield positions and both outfield corners. The bulk of his work came in left field and at the two middle-infield slots, but Motter’s versatility is undoubtedly an appealing factor to the Mariners, especially when considering the fact that he carries a fairly solid .266/.338/.437 slash with 27 homers and 45 steals in parts of two seasons at the Triple-A level (215 games).

Thompson rated as the Mariners’ No. 22 prospect, according to MLB.com, whose scouting report gives the former fourth-round pick (No. 125 overall, 2015) a chance to develop three average-or-better offerings. His fastball currently sits in the low 90s and touches 93 mph, though there’s some room for further growth, according to MLB.com’s Jonathan Mayo and Jim Callis, so he could add some heat down the line. He also has the makings of at least an average slider and changeup, though they’re both inconsistent, the MLB.com duo notes. Thompson just turned 20 in September and has a 2.87 ERA with 8.9 K/9 against 3.4 BB/9 in 31 1/3 professional innings — all of which have come with the the club’s Rookie-level affiliate.

Kittredge, 27 next March, split this season between Seattle’s Double-A and Triple-A affiliates, posting a 3.50 earned run average with 10.5 K/9 and 2.4 BB/9 in 72 innings of work. He made five starts but worked primarily out of the bullpen.