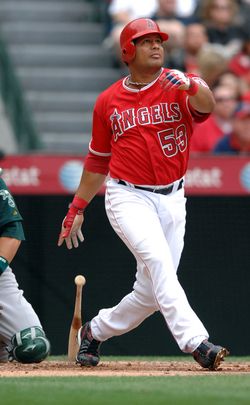 Both the player and club are in a bind in 2011. Abreu's contract contains a $9MM vesting option for 2012 that will kick in with 433 plate appearances next year, a total he's reached every year since 1998. If the option vests, the Angels are on the hook for another year of Abreu's decline phase. If it doesn't, Abreu is a declining 37-year-old free agent that is best suited for designated hitter. Those guys aren't in high demand.

Abreu has long been a productive player in this league, one that should at least spark some Hall of Fame debate, but his best course of action in 2011 is to play well enough (and often enough) that his option kicks in. It's highly unlikely he'll find that kind of money on the open market after the season.