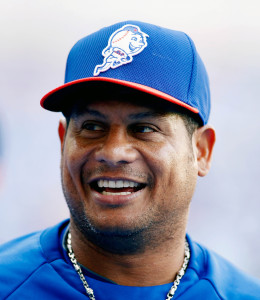 The Mets announced (on Twitter) that they have re-signed Bobby Abreu to a minor league contract and assigned him to Triple-A Las Vegas. The 40-year-old veteran has already appeared in 67 games for the Mets this season after signing a minor league contract at the end of March. New York designated him for assignment and released him earlier this month.

Abreu slashed .238/.331/.336 with one homer in 142 plate appearances for the Mets earlier this year. He raked in 45 plate appearances at Triple-A before being promoted to the big league club, hitting .395/.489/.579. Prior to hooking on with the Mets this season, Abreu had inked a minor league deal with the Phillies, a team with which he enjoyed some of his best seasons, but Philadelphia cut him loose late in Spring Training despite a respectable showing.

The Mets have designated veteran outfielder Bobby Abreu for assignment, the club announced. Kirk Nieuwenhuis will take spot on the active roster, according to the Mets.

Abreu, 40, has a .238/.331/.336 triple slash through 142 plate appearances on the year, which rates just below league average. After a hot start to the year (.913 OPS in May), Abreu has cooled considerably and seen his playing time dissipate. Though his final production fell just below replacement level, that is no mean feat for a man of Abreu’s age.

It remains to be seen whether Abreu will seek to continue his playing career, but it would not be surprising to see a club add him on a minor league deal to provide some depth. Indeed, he tells Anthony DiComo of MLB.com (Twitter link) that he is not yet ready to retire and will keep his options open for the time being.

The Mets have announced that they will promote former star outfielder Bobby Abreu from Triple-A Las Vegas tomorrow. Abreu is 40 and hasn't played in the big leagues since 2012, which he spent with the Angels and Dodgers. But he made a good impression in Vegas, hitting .412/.500/.529 in 40 plate appearances there, and the Mets have space for a left-handed bench player after trading Ike Davis to the Pirates. As Newsday's Marc Carig tweets, that means the Mets' active roster will include Abreu, Bartolo Colon, Kyle Farnsworth, Daisuke Matsuzaka and Jose Valverde. Here are more notes from around baseball.

Toolsy Pirates outfield prospect Gregory Polanco ought to be the next top prospect to win a promotion, MLB.com's Jim Callis writes. MLB.com ranked Polanco the No. 13 prospect in baseball heading into the season, and he's done nothing to diminish his reputation since then, hitting .439/.475/.667 in 61 plate appearances so far for Triple-A Indianapolis. "He's done a little bit of everything," says Pirates assistant GM Kyle Stark. "It's been fun to watch. The exciting thing about him is he's extremely driven and has very good feel for making adjustments, so it allows him to keep getting better." Here are more notes from around the National League.

The Mets have signed Bobby Abreu to a minor league deal, the club announced. It was reported earlier today that New York was considering the move.

Abreu, 40, will start off in Triple-A Las Vegas, and his path to a MLB role with the Mets is less than clear. After a strong run through the Venezuelan Winter League in which he showed power that had waned in recent big league seasons, Abreu put up a .244/.404/.366 line over the spring with the Phillies. He returned to the open market, however, rather than accepting a minor league slot in the Philadelphia organization.