The Rays are next in our Offseason In Review series.

Free agency hit the Rays especially hard this offseason.  Their expected losses were known well in advance, but it's still a daunting list.  The Rays saw almost their entire bullpen sign elsewhere, watched Crawford ink a megadeal with a division rival, and traded a few regulars for good measure.  The fascinating part is that Rays executive vice president of baseball operations Andrew Friedman still put together a team that will compete in baseball's toughest division.

Just to underscore the Rays' losses: 11 members of the 2010 team signed Major League contracts elsewhere this winter, most of them as free agents.  Teams committed $238.05MM to the group over 24 contract years.  The eleven departed players will earn about $67MM in 2011, roughly $25MM more than the Rays' entire payroll.  On the plus side, the losses of Crawford, Soriano, Balfour, Benoit, Choate, Hawpe, and Qualls will result in ten extra draft picks within the top 75 in June.  You have to wonder if Hawpe and Qualls denied their arbitration offers due to handshake agreements beforehand, which MLBTR's Ben Nicholson-Smith alluded to in January. 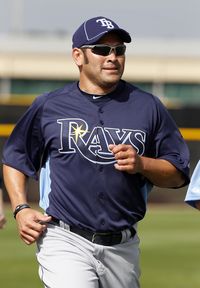 Despite ranking sixth in the AL in on-base percentage and eighth in slugging, the Rays' 2010 offense placed third at 4.95 runs per game due to exceptional hitting with runners in scoring position.  2011 brings offensive changes at first base, shortstop, left field, and designated hitter.  Of the four positions, only left fielder Crawford actually produced at the plate last year.  I think the dropoff from Crawford to Damon will be outweighed by improvements at the other three spots.  The Rays' timely hitting of 2010 will be tough to replicate, but the Damon/Manny tandem brings a pair of strong OBPs to the offense at the least.  Certainly there is a defensive loss in left field, but going from Bartlett to Brignac at shortstop is an improvement.

One could argue that Jeremy Hellickson is actually an upgrade over Garza in the rotation despite the former's inexperience in the Majors.  I imagine the Rays would have preferred to maintain the depth, but felt the need to reallocate Garza's money.  Friedman still made a big score in plucking five players out of the Cubs' farm system in the trade.

Even if the Rays had committed the $62.6MM required to retain Soriano, Benoit, Balfour, and Wheeler, the group obviously would not have been good for another 227 innings of 2.10 ball in 2011.  Can Friedman's new ragtag bunch manage an ERA under 4.00 this year?  It's anybody's guess, but Benoit, Balfour, and Howell were not considered relief aces when they first came to Tampa Bay.  And as manager Joe Maddon explained recently, no one was penciling the 2010 crew in as the league's best pen a year ago.  The 2011 bullpen is packed with sleepers.  As I mentioned in the Twins offseason in review, if you have to skimp on one area, let it be the bullpen.

Given the impossible position Friedman was in, I liked the Rays' offseason.  The Rays did a lot with the $12.5MM spent on big league free agents and assembled an interesting group of minor league deals.  Even with an $80MM payroll the Rays probably would not have won the Crawford bidding, though they might still have Garza as well as more certainty in the pen.