Today, Brandon Phillips may be the Reds’ most recognizable player. Five years ago? He was anything but. When then-GM Wayne Krivsky acquired Phillips from the Indians on this date in 2006, he was a 24-year-old unknown who had yet to convert his intriguing potential into Major League production. 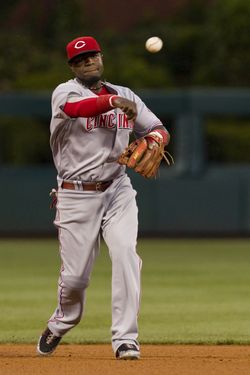 He’d had his chances. In a season’s worth of plate appearances over the the course of four years in Cleveland, Phillips had just a .556 OPS. The minor league numbers which had once helped solidify his place among the game’s best prospects had fallen off; in his third season at Triple-A, Phillips’ average, on-base percentage and slugging percentage all dropped.

But Krivsky decided to give Phillips a chance and the Indians, unable to find room on their roster for the out-of-options infielder, had had enough. Three and a half seasons after acquiring him in the Bartolo Colon trade, then-GM Mark Shapiro sent Phillips to Ohio’s other team for a player to be named later.

The Indians ultimately acquired reliever Jeff Stevens in the deal and would eventually send the right-hander to the Cubs in a trade for Mark DeRosa. The Indians later acquired current closer Chris Perez in exchange for DeRosa, so, in a roundabout way, they have something to show for Phillips.

Phillips, the longest-tenured position player on the Reds, outlasted Krivsky, who was fired in 2008. But the former GM deserves recognition for a deal that helped the Reds return to the top of the NL Central standings.