Inevitably, some teams will be interested in third base help this summer. The Giants, Cardinals and Marlins have question marks at the hot corner now and other teams will presumably be looking for help at third this June, July and August. It's just a question of which teams are interested and which players are available. 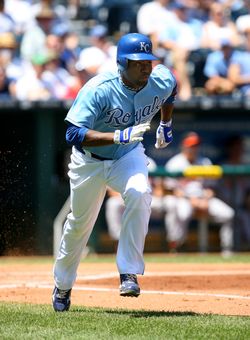 Of course Royals GM Dayton Moore would have to have interest in trading Betemit for anything to happen. Now 15-13, the Royals are in second place in the AL Central behind only the surprising Cleveland Indians. If they continue winning more games than they lose, the Royals may not be interested in selling at all.

But if top third base prospect Mike Moustakas picks up the pace in Triple-A (his OPS now sits at .697) the Royals could decide to make Betemit available and, after they make a trade, promote Moustakas. Betemit is a free agent after 2011 and, unlike Moustakas, he isn't a long-term solution for K.C. Perhaps the Royals could flip him for a player who will contribute to their next great team.

Betemit's hot hitting, salary and versatility (he has MLB experience at short, first, second, left and right) suggest other teams are likely to call Moore later this summer. The Royals could stay hot, or Moustakas could stay cold, but it won't surprise many people if Betemit becomes trade bait within a few months.