The Brewers surprised some people by trading for Shaun Marcum and Zack Greinke last offseason and it turns out GM Doug Melvin wasn't done dealing for impact pitchers. The Brewers and Mets announced that Milwaukee has acquired Francisco Rodriguez and cash for two players to be named later.  The Mets will choose the players from a list of five Brewers minor leaguers by a date in September, tweets MLB.com's Anthony DiComo. 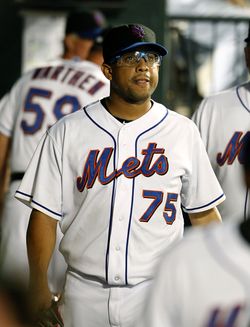 “Francisco has been one of the best relievers in the game for many years,” Melvin said in a statement. “He is a high-quality arm who will be a tremendous asset to our bullpen as we prepare for the final months of the regular season and playoffs.”

The Brewers obtained almost $6MM in the deal, according to Ken Rosenthal of FOX Sports (on Twitter). The Mets pay slightly less than half of the $4.9MM Rodriguez earns in 2011 and will be responsible for the $3.5MM buyout for his 2012 option.

The 29-year-old has a 3.16 ERA with 9.7 K/9, 3.4 BB/9 and a 52% ground ball rate in 42 2/3 innings of relief this year. Those aren't the only numbers that matter for Rodriguez and the Brewers, however. He has finished 34 games and a clause in his contract dictates that his $17.5MM option for 2012 becomes guaranteed if he finishes 55 games this season. Otherwise, the Mets will pay for a $3.5MM buyout and Rodriguez will hit the open market.

Rodriguez, who signed a three-year $37MM free agent contract after saving 62 games in 2008, recently hired Scott Boras. The agent suggested earlier in the week that his new client would be unlikely to accept a trade to one of the ten teams on his no-trade list if it meant becoming a setup man. Melvin told Tom Haudricourt of the Milwaukee Journal Sentinel that manager Ron Roenicke will decide how to use Rodriguez and current closer John Axford depending on the situation.

It's not the first time that Melvin has made the first major trade of the summer. Back in 2008, he acquired C.C. Sabathia from the Indians in a deal that helped send the Brewers to the postseason for the first time since 1982. The 49-43 Brewers are now tied with the Cardinals atop the National League Central standings, one game ahead of the Pirates and four games ahead of the Reds.

Jon Heyman of SI.com first reported the move (Twitter links). For our instant take on the fantasy baseball ramifications of this deal for the Brewers and Mets, check out Dan Mennella's post at CloserNews.com, and be sure to follow @closernews on Twitter.