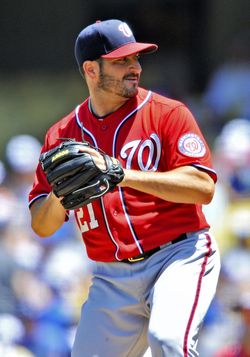 The Diamondbacks added an innings eater for the stretch drive today, acquiring righty Jason Marquis from the Nationals for shortstop prospect Zach Walters, the teams announced. Marquis returns to the NL West, where he won 15 games in '09 for the Rockies.

The Diamondbacks selected Walters in the ninth round of last year's draft.  The 21-year-old has a .302/.377/.485 line with 42 extra base hits in 412 plate appearances at Class A South Bend this season.  He has mostly played short, but has also appeared in ten-plus games at second and third.