After an offseason of heavy managerial turnover, the 2011 season featured 12 skippers in their first full seasons with their current clubs. We checked in on the managers midseason and, now that the regular season is over, it's time to take another look at how the leadership changes have gone.

Keep in mind that teams' won-loss records reflect their players, their health and their opponents, not just the managers' work.

American League
Buck Showalter’s Orioles finished 69-93 and there are rumblings that he could move upstairs to the front office. John Farrell’s Blue Jays finished with a .500 record – 81-81 – in his first season as a manager.

Ned Yost led the Royals to a 71-91 record as Kansas City surpassed the 70-win plateau for just the second time in eight seasons. More importantly, Yost oversaw the big league debuts for top prospects like Eric Hosmer and Mike Moustakas. Former Indians manager Eric Wedge had the punchless Mariners on the fringes of contention, until an extended slump dragged the team to the bottom of the AL West, where they finished with a 67-95 record. 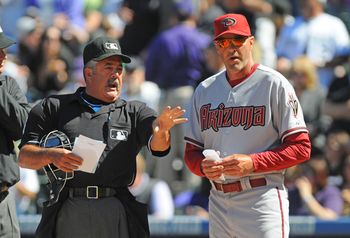 National League
The Braves lost their grip on the NL Wild Card with a late-season slide and finished 89-73 under new manager Fredi Gonzalez. Terry Collins' Mets finished 77-85 and the club picked up Collins' 2013 option this week. Another NL East skipper, Edwin Rodriguez, resigned after the Marlins' record slipped to 32-39.

Ron Roenicke led the Brewers to a division title and a franchise record 96 wins. Mike Quade of the Cubs completed his first full season in Chicago with a 71-91 mark. Clint Hurdle's Pirates were in the playoff mix for four months and eventually finished under .500 again with a 72-90 record.

Kirk Gibson (pictured) is headed to the playoffs after leading the Diamondbacks to 94 wins and the NL West title. Another former big league star, Don Mattingly, led the Dodgers to an 82-79 mark after a slow start.