The Cubs reached an agreement with outfielder David DeJesus, tweets Ken Rosenthal of FOX Sports.  It's a two-year deal, tweets MLB.com's Jane Lee.  The Cubs confirmed the deal on Twitter, noting the inclusion of a club option for 2014.  The contract guarantees $10MM, tweets SI's Jon Heyman.  Paul Sullivan of the Chicago Tribune tweets salary details.  DeJesus will be the Cubs' regular right fielder.  He makes his offseason home in Wheaton, Illinois, according to the Cubs' press release. 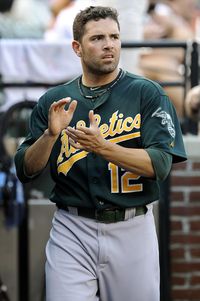 DeJesus, 31, had a disappointing offensive season for the Athletics after being traded from the Royals a year ago, hitting .240/.323/.376 in 506 plate appearances.  In his Royals career, DeJesus hit .289/.360/.427 in 3,799 plate appearances.  Despite his offensive struggles in 2011, DeJesus was worth over two wins last year according to FanGraphs, partially on account of strong right field defense.  He's logged over 1,700 innings at each outfield position in the course of his nine-year career.  DeJesus was offered arbitration by the A's last week, so they'll receive a supplemental draft pick in 2012 for their loss.

DeJesus marks the first signing under new Cubs president Theo Epstein and GM Jed Hoyer.  Epstein had interest in acquiring the outfielder for the Red Sox at the 2010 trade deadline until he tore a ligament in his thumb.  DeJesus, an ACES client, ranked 29th on our top 50 free agents list, and I'm proud to say I actually predicted this one correctly in MLBTR's contest.  With four of ten correct I rank 150th overall; six people are tied with six correct picks.