Fifteen seasons and two World Championships later, Jason Varitek is calling it a career. The 39-year-old catcher will announce his retirement in Fort Myers this Thursday, Peter Abraham of the Boston Globe reports. Varitek is expected to remain involved with the Red Sox organization. 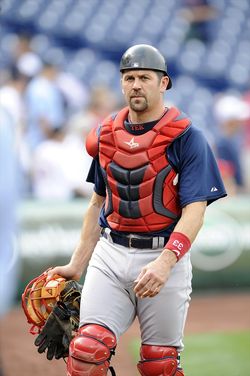 Varitek, Boston's longtime captain, was a key member of the 2004 and 2007 World Series winners. He caught four no-hitters in his career — one each by Jon Lester, Clay Buchholz, Hideo Nomo and Derek Lowe. The Red Sox acquired Lowe and Varitek from the Mariners for Heathcliff Slocumb in a fateful 1997 trade. Seattle had selected the switch-hitter with the 14th pick in the 1997 draft.

The Red Sox, who had interest in re-signing Varitek to a minor league deal, will employ Jarrod Saltalamacchia, Kelly Shoppach and Ryan Lavarnway behind the plate this year. Interestingly, Varitek and longtime rival Jorge Posada retired during the same offseason.